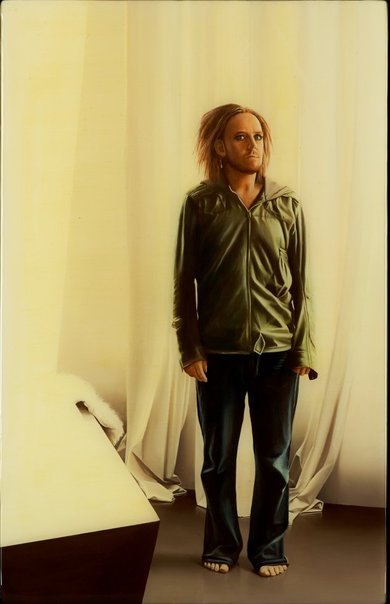 Singer/songwriter Tim Minchin is building an international reputation with his off-kilter brand of musical comedy. With his artfully unkempt hair, heavy eye make-up and bare feet, his act is a wickedly entertaining mix of piano playing, cheerfully offensive songs, physical comedy and stand-up.

His witty lyrics poke fun at all manner of sacred cows including religion, death, censorship and romantic love. He won the prestigious Perrier Newcomer Award at the 2005 Edinburgh Festival Fringe with his first solo show, Dark Side, and is now co-writing a musical based on Roald Dahl’s novel Matilda for the Royal Shakespeare Company to premiere in late 2010.

Sam Leach says he approached Minchin ‘primarily because I really like his style of comedy. The topics he deals with – social commentary, the appeal to reason over religion and that kind of thing – tie in with my work. But in a funny way I also see my career reflected in his. His career is much bigger than mine but we became successful in our fields almost simultaneously and our first and second children were also born about the same time.’

Leach met Minchin in London last year when he was exhibiting work in a group show at Bedfordbury Gallery, Covent Garden. They talked about a portrait and Minchin suggested Leach portray him crucified on a neon Perspex cross. ‘But I don’t know if that’s my style,’ says Leach.

They had a day together at Minchin’s London home where Leach did sketches then caught up again in Melbourne during Minchin’s current tour, Ready for This. ‘I wanted a full-length portrait because he does use his whole body when he performs. It’s him in his house so there are a few personal pointers, like the baby’s lamb skin.’

Born in Adelaide in 1973 and based in Melbourne, Leach has a Bachelor of Arts, Honours (Painting) and a Master of Art (Fine Arts) from RMIT University. He won the Metro5 Art Award and the Fletcher Jones Prize in 2006 and the Eutick Memorial Still Life Award in 2007. He has had ten solo shows in Sydney, Melbourne and Adelaide and has been represented in various group shows. This is his fourth consecutive year in the Archibald Prize.