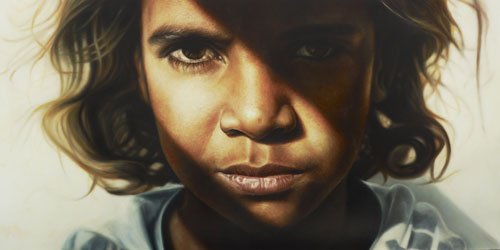 Vincent Fantauzzo was highly commended at 2008’s Archibald Prize for his triple-image portrait of his friend Heath Ledger, painted just weeks before the actor’s death. The painting also won the People’s Choice award.

This year his subject is Brandon Walters, who played the young Aboriginal boy Nullah opposite Nicole Kidman and Hugh Jackman in Baz Luhrmann’s film Australia. Born and raised in an Indigenous community near Broome, Western Australia in 1996, Walters was diagnosed with leukemia at age six but overcame the cancer after a year in hospital. He had never acted before performing in Australia.

Fantauzzo first became aware of Walters when Luhrmann, a friend of the artist’s, called and told him what an ‘amazing kid’ he was. ‘I thought it would be great to meet him and that he and his family might be an interesting subject for a portrait,’ says Fantauzzo. ‘He was really shy at first but as I got to know him he became bubbly and excited. He has already experienced a lot as a child, which I believe adds to his presence.’

Fantauzzo worked on various portraits in his Melbourne studio, including one of Walters with his father, and another of his mother. For this painting, he did a couple of fully finished sketches, after which the painting flowed easily. Fantauzzo decided to focus on Walters’ face for a couple of reasons. ‘He has a very intense gaze and amazing eyes so I wanted the focus to be on that. And I wanted the feel of the harsh Australian sun across his face but for him to remain partly in shadow as well because he can be quite shy and intense – so I was trying to capture those ideas in one composition.’

Born in England in 1977, Fantauzzo came to Australia as a child. He has a Bachelor of Fine Art (Painting) and a Master of Fine Art from RMIT University, Melbourne. Last year he was awarded an artist’s residency at Chancery Lane Gallery in Hong Kong where he had a solo exhibition. He has also had solo exhibitions in Mumbai, the recent LA art fair and one at Sydney’s Boutwell Draper Gallery, which coincided with the opening of the Archibald. He was a finalist in last year’s Metro 5 Art Award, EMSC Award and Duke Gold Coast Art Prize.