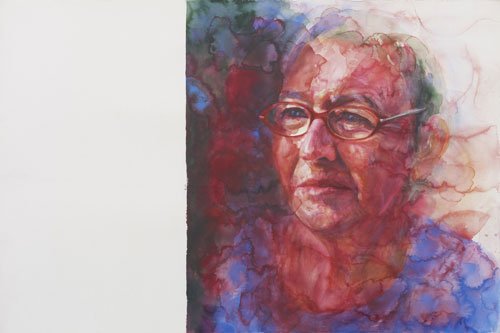 As a portrait artist, Leeanne Crisp is interested in how we know people through their creative work. She first read Gay Bilson’s book Plenty: Digressions on Food in 2004 and was entranced by her ideas. “Bernadette Hince cooked us dinner before a Festival of Ideas at Manning Clark House in Canberra in early 2005 and we started a conversation, which still continues,” says Crisp.

A quote from Plenty has stayed in Crisp’s mind in relation to the renowned chef: “When it seems alchemical and becomes food for thought, it doesn’t transcend its materiality but confirms it with a confidence that is sustaining in the face of inevitable death, plant or animal, to support life, and suggests the cruel paradox that touches on the nature of art and the imagination.

“It is the work of cookery in the hands of the alchemical few that allows us this intimation of the sublime worth of the material, something so gloriously, so devastatingly dependent on death. Dust to dust, ashes to ashes, flesh to transcendent moment of consequence.”

The consideration of sensuality and mortality set Crisp thinking about Persephone, the Greek goddess of the underworld but also an embodiment of Earth’s fertility. Four years ago, she began making images of pomegranates and eventually images of Bilson. With time, the essence of the pomegranate – the colour, fluid and skin, both inside and outside – became fused with the human image.

“The segmenting of my watercolours refers to strips of photographs or stills in film,” says Crisp. “Film and photography, along with literature and the history of painting, have always inspired my work. The white space refers to the void.”

Born in Adelaide in 1950, Crisp studied at the South Australian School of Art and has a Masters Degree from the Australian National University, School of Art. She has exhibited in solo and group shows, including several at the National Portrait Gallery. She was a finalist in the Portia Geach Memorial Award in 2003 and 2004 and the Dobell Prize in 2007. This is her first time in the Archibald.