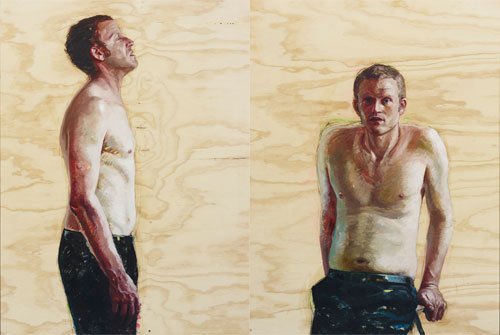 John Safran is a documentarian and media personality, whose credits include the AFI Award-winning series John Safran vs God for SBS and the television talk show Speaking in Tongues, co-hosted with Father Bob, with whom he now does Sunday Night Safran for Triple J.

Yvette Coppersmith comes over quite sentimental when discussing her connection with Safran – which, as she says, 'is not John’s style at all’. They met in October 2007 when she attended a dinner at which he was the guest speaker. By the end of the night they had chatted and agreed that he would be her next Archibald subject.

Telling her aunt about the meeting, Coppersmith discovered to her surprise that their grandparents had been close friends before migrating to Australia. 'Because they were on his mother’s side, I had no idea, as the name wasn’t Safran,’ says Coppersmith. 'It was surreal to then find out new information from John’s dad about my grandfather who died when I was four.’

The process of working on the portrait involved a few games of Scrabble (Safran thrashed her), several sittings, 120 photographs, 20 pencil drawings, 11 oil studies on tracing paper, six oil studies on board and one life-size painting on masonite, which was a finalist in last year’s Portia Geach Memorial Award.

That portrait, with Safran wearing a shirt, was similar in pose to an 1896 Hugh Ramsay painting Nude study, old man of a shirtless man. 'I liked its frank depiction of the skin, the figure and introspective quality of the sitter,’ says Coppersmith who decided to paint Safran topless. He agreed as long as he had a couple of months to work out at the gym. Fifteen months after they first met, Coppersmith painted these two panels in three days.

Born in Melbourne in 1980, Coppersmith has a Bachelor of Fine Art (Painting) from the Victorian College of the Arts. A full-time portrait artist, she has had several solo shows and has been a three-time finalist in both the Doug Moran National Portrait Prize and the Portia Geach Memorial Award. She won the inaugural Metro5 Art Award in 2003 and was a finalist in last year’s Archibald Prize with a portrait of actor-singer Paul Capsis.