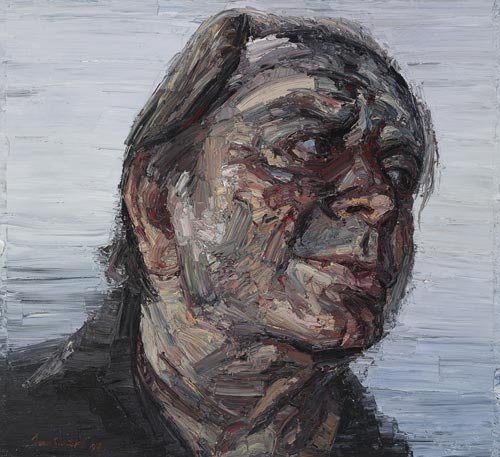 Ian Smith is a prominent Australian artist based in Queensland. His strong concept and drawing-based paintings explore universal themes through personal and local imagery. His work is represented in the National Gallery of Victoria, the Metropolitan Museum of Art in New York and numerous state and private collections. He has been an Archibald finalist eight times.

‘I like his work very much and we have been friends for over 12 years,’ says Jun Chen, who lives near Smith in Queensland.

Chen has painted Smith for the Archibald four times but this is the first to be selected. ‘The first one, in 1998, was a full figure,’ says Chen. ‘In 2004 I painted him nude. Last year I did a half-body painting, which was hung in the Salon des Refuses. This year I said to him: “I think I should be painting your face”.’

Born in China in 1960, Chen graduated from the Guangzhou Academy of Fine Arts in China in 1986. From 1986 to 1990 he worked as an art editor in book design and also lectured in fine arts at a Chinese art college. During this time he also entered many national arts competitions, winning several prizes. He immigrated to Australia in 1990 and graduated with a Master of Fine Art from the Queensland University of Technology in Brisbane. He has exhibited in many solo and group shows in Australia. He was an Archibald finalist in 2006 with a portrait of Australian artist Joe Furlonger and was hung in the Sulman Prize in 1997, 1998 and 2001.