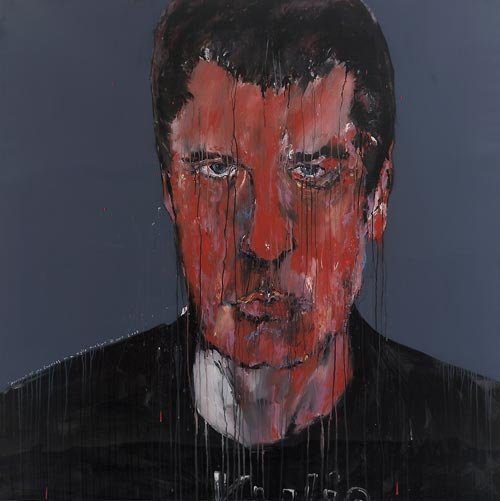 Jon Farriss is the drummer with iconic Australian band INXS. A client of Schubert Contemporary, where Anthony Bennett exhibits on the Gold Coast, he collects work by young contemporary Australian artists.
“INXS was part of my growing up,” says Bennett, whose first concert was an INXS gig in Mackay. The Queensland-based artist flew to Sydney for a sitting with Farriss where he did sketches. “We consumed quite a lot of wine and moved to a nightclub and the sketches got better,” says Bennett, who was inspired by the experience to embark on a series of paintings of other famous drummers, which will show in Auckland in May.
Bennett has been painting portraits solidly for around three years. He started with self-portraits, which evolved into repainting self-portraits of other artists. In his 2007 exhibition, super thanks for asking, he featured the superheroes of art such as Vincent van Gogh, Pablo Picasso and Brett Whiteley and gave the works titles from popular culture linking the two worlds of celebrity. Celebrity is a major theme in Bennett’s work. He appropriates the language and imagery of pop culture, using grabs from advertising, movies, pop music and cartoons as well as art history to create flamboyant, vibrantly coloured paintings in which the image is distorted into a form of expressionism. All his work is painted with his hands and fingers rather than brushes.
The portrait of Farriss “is also about the celebrity,” says Bennett. “Jon was telling me about the reality TV show they did in the US to find a new lead singer for INXS so that links nicely into the celebrity obsession I play with.” Bennett pictures Farris in a Kylie T-shirt. Kylie Minogue dated former INXS lead singer, the late Michael Hutchence. It also refers to his 2006 exhibition called post-minogue-ist which declared meat>potato ass>art kylie>batman.
Born in Mackay, Queensland in 1966, Bennett has a Bachelor of Visual Arts (double major painting/sculpture) from the Queensland College of Art, Griffith University. He has lived and worked in Rome, Tokyo and London and currently has a Queensland studio near Samford. He won the new generation art award at Art Sydney 07. This is his first time in the Archibald.