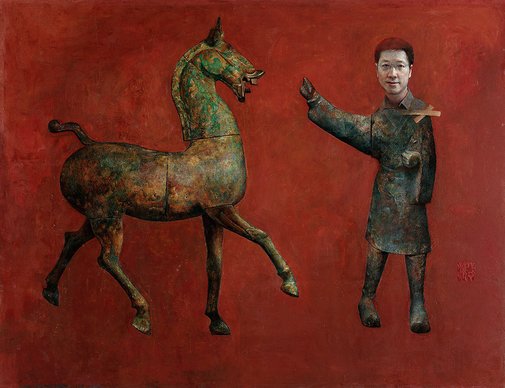 Liu Yang, the subject of Huihai Xie’s portrait, is curator of Chinese art at the Art Gallery of New South Wales. Xie has known him for many years.

‘I have always wanted to paint Yang’s portrait for the Archibald Prize,’ says Xie. ‘What made me reluctant to do so was his considerably young appearance: I was worried that youthful facial features may not convey a subject’s “experience and outstanding character” as required by the Archibald Prize. However, this year I decided to give it a try.’

‘Liu Yang is an established scholar in the field of Asian art, and has curated a number of successful exhibitions of ancient Chinese art since he joined the Gallery. I decided to create a composition that would hint at his expertise – a work that would combine ancient Chinese culture and postmodern ideas. An ancient Chinese bronze horse and a bronze groom of the Han dynasty (1st century CE) are thus used as components of the composition. The groom stretches out his hand to lead the horse on the left with invisible reins; he gazes at the viewer through Yang’s modern eyes. I didn’t want to smooth the transformation of Yang’s head and the groom’s body to make them look more coherent. Rather, I joined the two parts together with obvious pieces of masking tape. The design is a reminder to the viewer that there is a time gap between the bronze figures and the curator, reality and illusion.’

Born in Shanghai in 1957, Xie studied at Jiaotong University in Shanghai, graduating in 1984 with a Master of Arts (Painting). He began exhibiting in 1979. He arrived in Australia in 1989, holding his first solo exhibition in Sydney that year. He works as a freelance graphic designer and as a portrait painter. He also paints landscapes. He has been a finalist in the Doug Moran National Portrait Prize on four occasions and was a finalist in the Sporting Portrait Prize at the Art Gallery of New South Wales in 2000. He was hung in the 2003 Archibald Prize and also in the 1997 Salon des Refusés.