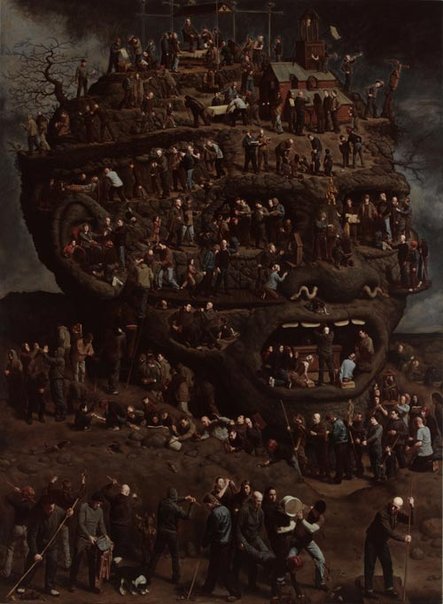 Marcus Wills’ painting The Paul Juraszek monolith was inspired by an etching called Allegory of iconoclasm by Marcus Gheeraerts the elder, a Flemish engraver, illustrator and painter best remembered as the illustrator of the 1567 edition of Aesop’s fables. Wills saw the etching in a book while researching for some paintings based on the apocalypse and thought he’d like to do something with it.

Casting around for a subject for his own version, Wills thought of Paul Juraszek, whom he had met once or twice when they showed at the same gallery. Juraszek is a Melbourne-based sculptor who makes mostly animals from myths and legends. “As it turned out he suited the subject even better than I could possibly have imagined,” says Wills.

Juraszek appears in the painting 29 times and in most cases the sculptures featured are his. The original etching is an allegory about the reformation. At the bottom of the painting there are iconoclasts smashing up relics, bones and Bibles and tossing them into a pit. Behind are clerics and, one assumes, their congregation collecting the relics and taking them away. All over the head, little religious ceremonies are taking place with monkeys involved in several of them – Gheeraerts’ dig at Catholicism one imagines. In Wills’ version it is Juraszek’s sculptures that are being smashed and then rescued by others. “In most of the little scenes the people are doing similar things to those in the original painting though I don’t see my version as a religious comment,” says Wills. Instead he sees it as “a kind of an allegory about the artist. Some of the scenes in the painting fit with this but not all.”

The work took Wills a good year and he admits that towards the end of the process he was feeling pretty burnt out and finding it hard to finish. “I wasn’t sure how it was going to look.”

Born in Kaniva, Victoria in 1972, Wills graduated from the Victorian College of the Arts with a Bachelor of Arts (Fine Art) in 1995. He has had three solo exhibitions in Melbourne and participated in various group shows. In 1999 he won the Brett Whiteley Travelling Art Scholarship and undertook a residency at the Cité Internationale des Arts, Paris.

Artist Marcus Wills is among the other figures in the painting.