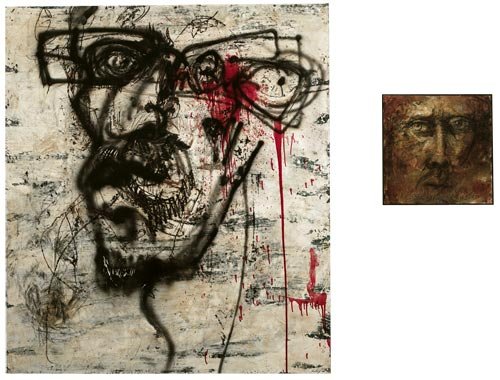 Craig Ruddy won the 2004 Archibald Prize with a portrait of Aboriginal actor David Gulpilil, which also won the People’s Choice in Sydney and Melbourne. The portrait, another mixed media work, became the subject of a court case when another artist claimed it was not a painting and therefore ineligible for the Archibald.

We all create our own reality and we have choice with every breath we take to change that reality, though we are often controlled by old patterns and expectations of others and ourselves. Why do we expect everything to fit into safe little boxes that are recognisable and therefore accepted?

This portrait is in reaction to winning the prize, and the case that followed. The piece to the left represents free raw expression. Winning the Archibald in 2004 brought many ups and downs causing many mixed feelings and emotions. My fabric of perception was torn apart leaving an open wound, which I had to look at to grow. Like all wounds once embraced it revealed the red river that flows within us all bringing with it new life. On your right alongside it travels the timeless observer, the comfort zone and what has been before. At the end there is no definitive and there are no limits.”

Born in Sydney in 1968, Ruddy is a self-taught artist. He has diplomas in interior design and graphic design from Randwick College of TAFE and in fashion illustration from East Sydney College of TAFE. He had his first solo show with the Sydney Fringe Festival in 2002 and has had solo exhibitions at Graphis Gallery, Sydney, in 2003 and 2004. He has participated in several group shows including the 2003 Salon des Refusés at the SH Ervin Gallery, Sydney.