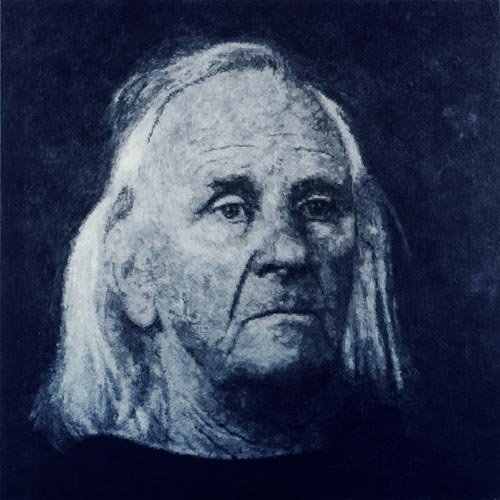 Ken Unsworth is one of Australia’s leading sculptors. He has had numerous solo exhibitions including a major survey show at the Gallery in 1998. In 1989 he was made a Member of the Order of Australia for services to sculpture. John Beard first met him in 1983 shortly after arriving in Perth from the UK to take up the position of head of fine art at Curtin University. Unsworth had work in a show at Art Gallery of Western Australia and Beard was immediately impressed by his work and his vitality.

“I have always thought of him as friendly and cheerful, someone who appears not to take himself too seriously, but when you engage in a conversation with him about his work he is deadly serious,” says Beard. “As I said last year, relating to my portrait of Hilarie Mais, I think it is particularly problematic, and therefore challenging, for an artist to make a portrait of another artist. First it is important to achieve a condition of mutual trust and second, it is necessary to maintain a degree of dynamic tension in the painting of the portrait. Making an artwork is, after all, a result of a kind of struggle, a precarious equilibrium that must remain suspended so as to retain its intensity. From this collaboration with the artist as subject, an aspect of double portraiture is possible. If the viewer knows the work of the artist portrayed, another visual layer registers through or beyond the perceived portrait.”

Born in Aberdare, Wales, in 1943, Beard was educated at the University of London and the Royal College of Art. Beard resigned from his tenured position to paint full time in 1989 and has since held solo exhibitions in Sydney, New York, Chicago, New Delhi, Madrid, London, Melbourne and Perth. His most recent solo exhibition, entitled Visao Fugitiva, was shown at Centro de Arte Moderna, Fundacao Calouste Gulbenkian in Lisbon from June 2005 to January 2006.