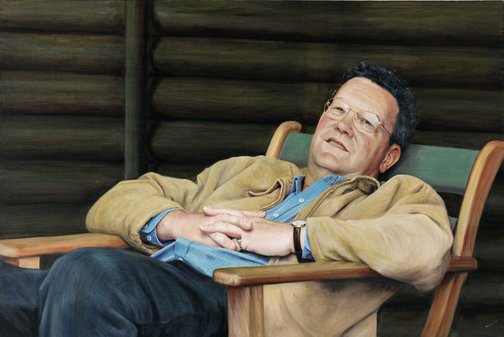 Although Avril Thomas has always enjoyed drawing, it remained a private pursuit until 1996. Whilst living in Queensland, she was asked to teach a group of adult students drawing at the Coloundra Learning Co-Op. Returning to South Australia she decided to get some formal training at the Adelaide Central School of Art. Since then, although she continues to work as a nurse, she has participated in a number of group shows and has had several solo exhibitions.
Three years ago she sent away for an application form for the Archibald Prize but was somewhat dismayed to read the criteria. “I had a conniption because I thought ‘I don’t know anybody famous,’” she says with a laugh. “Then one day I was selling some irises in my backyard and suddenly there was Professor Michael Tyler, who is world-renowned for his work with frogs, standing in my garden.”
Last year, Thomas had work in an exhibition in Adelaide, which was opened by Nicky Downer, wife of Alexander Downer, the Minister for Foreign Affairs. She asked Mr Downer if he would sit for her and was thrilled when he accepted.
The challenge then was to find time in his hectic schedule.
Thomas eventually had a sitting with Downer on the veranda of his log house in Adelaide, which overlooks a beautiful garden and valley of gums. He is pictured reclining on a chair given to him by his mother on his 50th birthday. The pose struck Thomas as a direct contrast to Downer’s frantic, international work schedule.
“To me, the pose is very Australian, describing our relaxed temperament, and it seemed very suitable for the Foreign Minister from Down Under,” she says. “I felt he was showing himself to me as a man and not as a politician and that’s how I wanted to capture him.”
Born in Malaysia in 1956, Thomas came to Australia at age 10 to go to boarding school, her family following when she was 17. She is now based in Adelaide. As an artist, she focuses primarily on portraiture, in charcoal, graphite pastel and oil, and has completed over 50 private commissions, all in a tonal realist style. She also paints floral and figurative works. Her work can be found in Queensland, South Australia, Hong Kong and the USA.