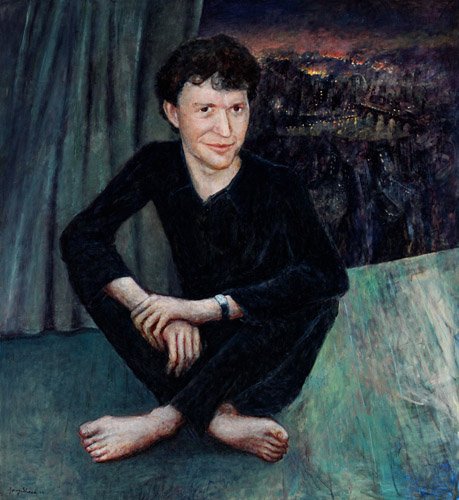 Simon Phillips is artistic director of Melbourne Theatre Company and an award-winning director of opera and musicals as well as plays. He and Garry Shead first met when Phillips approached Shead, one of his favourite Australian artists, about an idea he had for a stage production. Phillips asked if Shead would do a painting, which he could then show to six young Melbourne writers and ask them to write a short play inspired by it. The stage set would recreate the environment of the painting and the writers were to contrive for the characters to be in exactly the same situation as the figures in the painting at some point in their play.
Shead liked the idea and painted Homage to Rembrandt, which featured the Dutch master in his studio with a winged angel. The production, entitled Art & soul, played at the Fairfax Studio in the Victorian Arts Centre in November/December 2000. Shead’s painting was hung in the theatre foyer during the season run. Shead attended some of the rehearsals and watched as Phillips sat cross-legged and bare-footed whilst he worked intensely with the actors. “The guru!” says Shead with a laugh.
Last year, Shead returned the compliment and approached Phillips about sitting for a portrait. Towards the end of the year Phillips went to the artist’s studio in Bundeena and sat “very patiently. I tried three paintings that didn’t work so we decided to abandon it,” says Shead. “Then looking at one of them again later I saw what I needed to do and worked on it, then told Simon it was finished.”
Born in Sydney in 1942, Shead studied at the National Art School. He worked as an editor, cartoonist, filmmaker, film editor and scenic artist with ABC-TV before his first solo exhibition in 1966. Since then he has had over 50 solo exhibitions and taken part in more than 60 group exhibitions include 13 Archibald Prizes.
He won the Archibald in 1993 with a portrait of Sydney publisher Tom Thompson, and the Dobell Drawing Prize in 2004. His art has been the subject of three books: The DH Lawrence paintings (1993), Encounters with royalty (1998), and, most recently, Garry Shead and the erotic muse (2001), all written by Sasha Grishin. Shead was the subject of a portrait in last year’s Archibald Prize by Kerrie Lester.