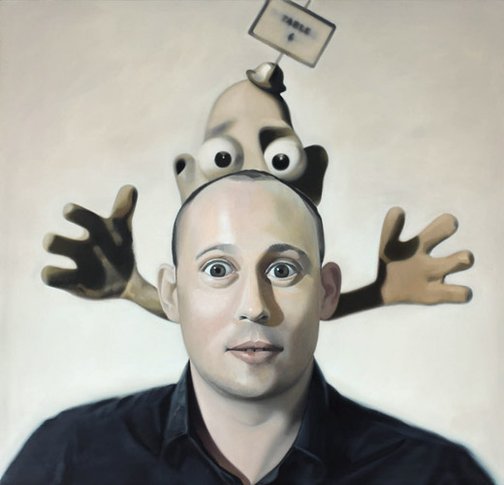 The subject of David Ralph’s portrait is Adam Elliot who wrote and directed Harvie Krumpet, the 22-minute clay animation narrated by Geoffrey Rush, which won an Academy Award in 2003 for Best Animated Short Film. His short animated film trilogy, Uncle, Cousin and Brother, has participated in over 300 film festivals and won over 50 awards. Each of the three was short-listed for Academy Awards.

Ralph and Elliot have known each other for around ten years having both graduated from the Victorian College of the Arts, Ralph from the art school and Elliot from the film school.
“I was interested in his imagination,” says Ralph. “He used to put these little bug-eyed creatures on tee shirts which then morphed into characters like Uncle and Harvie. His imagination is part and parcel of who he is, so much so that I see them as being inseparable. Adam is a very animated person. He’s always very wide-eyed when he’s talking to you, and you see that he’s always thinking. He’s also a very visual person and it was the clay colourings of his medium I’ve tried to capture in his skin tones.”

The portrait was done over four sittings around Christmas when Ralph asked Elliot to bring a mannequin of Harvie along with him. Ralph doesn’t tend to do a lot of portraiture. Known as a realist, he uses a similar realistic painting style for his other work.

Born in Warnambool, Victoria in 1963, Ralph is a Melbourne-based artist. He has a Bachelor of Fine Art (Painting) and a Master of Fine Art (Research, Painting) from the Victorian College of Fine Art and a MA (Painting and Digital Print Media) from the Chelsea College of Art and Design in London. He has six solo exhibitions since 1999 in Melbourne and London and has participated in numerous group shows. His work is held in public and private collections in Australia, the UK, the US and Paris.