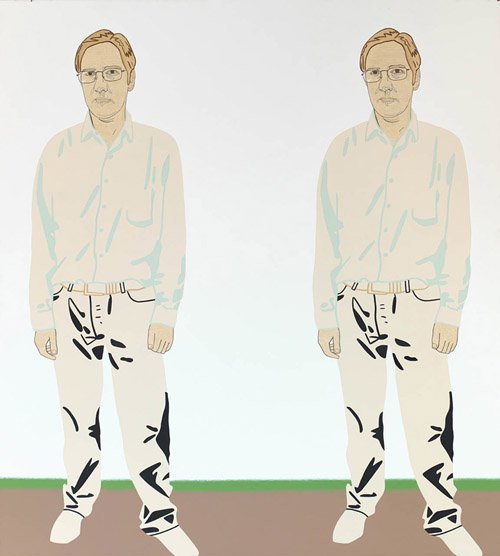 Darren Knight is an art dealer. He worked in Ray Hughes’ Brisbane and Sydney galleries for several years before opening the Darren Knight Gallery in Melbourne in 1992, which he relocated to Sydney in 1997.

Jon Campbell first met Knight when he was exhibiting in a group show for Ray Hughes. They struck up a friendship, which they have maintained ever since. Casting around for a subject for the Archibald Prize, Campbell was keen to paint someone of his own generation, to whom he was related closely as an artist – and Knight seemed to fit the bill. “Also there’s something about the way he looks; his head is interesting to me.”

Campbell is a keen fan of Andy Warhol’s and has always liked Warhol’s double Elvis pictures. Campbell has done a couple of double portraits in the past and having enjoyed working on the idea of how you move between the two images, thought that it was an approach that could work well for the Archibald. “It’s another way of engaging the viewer because everyone is looking to see if both portraits are exactly the same,” he says. “Also someone like Darren is not a star, he’s a normal guy so to show him in a double portrait elevates him above the ordinary – not that Darren is ordinary! But he’s not a celebrity.”

Campbell worked from drawings and photographs and decided early on that the portrait should be life-size. “I thought it should be minimal and flat – which is how I normally paint.”

Born in Belfast in 1961, Campbell came to Australia in 1964. He has been exhibiting since 1986 and has been represented in group exhibitions in Australia, Italy and New Zealand at galleries including Newcastle Regional Art Gallery, Ian Potter Centre at the National Gallery of Victoria, the Museum of Contemporary Art in Sydney and the Darren Knight Gallery in Sydney in 2000 and 2005. He undertook a residency at the Australia Council’s Greene Street Studio in New York in 1990 and won the Herald Sun Contemporary Art Prize in 1995.