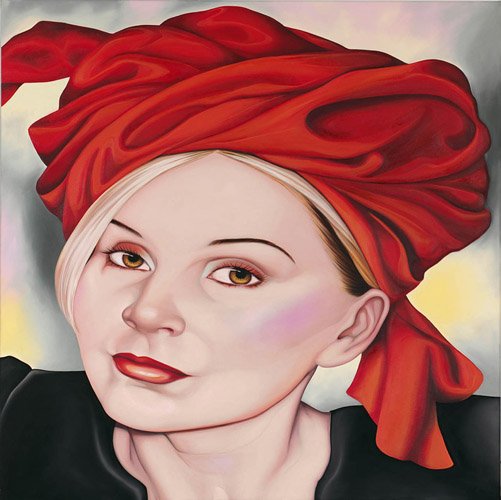 Annette Bezor has painted herself on many occasions but generally incorporates the self-portraits into paintings where they don’t really look like her. ‘I use myself as a model a lot,’ she says, ‘but I’m not particularly careful to get a likeness.’

However, in painting an actual self-portrait for the Archibald she used a mirror to examine her eyes and features and worked to capture an essence of her face. The turban, she says, relates to the many artists in history who have put women into pictures wearing turbans, in particular, a painting by Polish-born art deco artist Tamara De Lempicka called Wisdom.

This self-portrait fits into Bezor’s current body of work. For several years now she has been exploring themes of female sexuality and the representation of women in art. In the series Tension (2001) she appropriated well-known depictions of women from classical painting, such as Ingres and Da Vinci, and also more modern images by artists like De Lempicka and Russian-born Vladimir Tretchikoff. As Chris Reid writes on Bezor’s website: ‘The classical and the modern images Bezor uses all idealise female beauty. They have become iconic, epitomising the objectification of the female in Western art over centuries, and also shaping society’s perceptions of women and race, and constructions of gender, society and power.’

This particular portrait was painted over two months. ‘The painting looks much simpler than it is,’ says Bezor. ‘The idea is to make it look effortless but it didn’t come easily.’ As for the humorous title, Bezor believes that self-portraiture shouldn’t be taken too seriously. ‘I’m not trying to preach to anyone.’