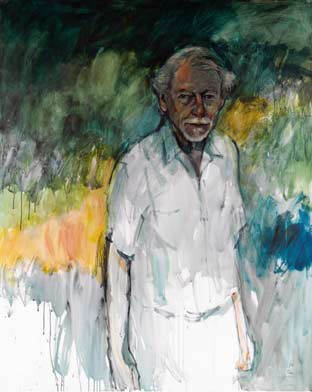 Guy Warren is a highly regarded Australian artist who has had over 50 solo exhibitions in Australia, London and Edinburgh and three major touring survey and retrospective exhibitions, one of which is currently touring Australia.

Ann Cape has known him for some time and has great respect for him as an artist. ‘He is a most admirable person with a generosity of spirit and is a genuine supporter of other, younger artists,’ she says. ‘Guy has a lively, interested face and a great laugh. He has the ability to make one feel like the only person in the room.’

‘As an artist, … his work has constantly evolved, moved on and not repeated itself. But the continuing theme in his work is the interconnectedness of people and the environment. Guy has a passion for the rainforest and often retreats to his shed in the bush.’

For this portrait, Cape started with detailed drawings of Warren at his home and in the studio. ‘I like to work quickly and spontaneously, drawing with paint,’ she says. ‘In this portrait my thought was to blend him into the landscape. This is the first painting I did of Guy, followed by two more, which I laboured over. Inevitably I returned to the first work when I had to decide which to submit.’

After studying drawing and sculpture in London, Cape returned to Sydney and graduated from the National Art School in 1974. She has taught in high schools, TAFE colleges and community arts centres including the Workshop Art Centre and the Royal Art Society. She has had several solo exhibitions and has exhibited extensively in group shows. Her work has been included in the Salon des Refusés twice, the Portia Geach Memorial Award four times and the Keduma Drawing Prize. She has won numerous prizes for painting and drawing, has completed many portrait commissions. Her work is represented in private and corporate collections in Australia and overseas.