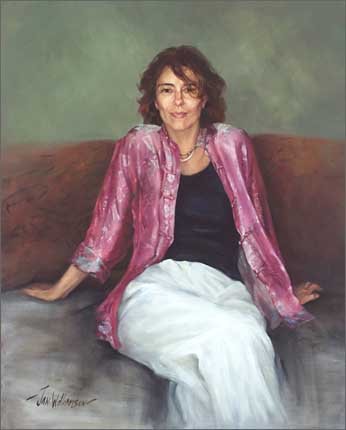 Rachel Ward has been an actor for 23 years. She has starred in numerous films and television films amongst them The thorn birds, Dead men don’t wear plaid, Against all odds and On the beach. She has also written and directed award-winning short films. She is a prolific fundraiser and is ambassador for three family support programs. She is married to Australian actor/director Bryan Brown with whom she has three children.

“It’s always nice to paint someone you have a great deal of admiration for,” says Jan Williamson. “Rachel does a lot of charity work and I admire people who give back to the community. She is also a wife and mother and leads a life of everyday normalcy, which you tend to forget when someone is a well-known actor. She’s such a natural person – a bit like Jenny Morris [whom Williamson painted for last year’s Archibald Prize] – that she is very easy to talk to.”

Originally Williamson had wanted to do a double portrait of Ward and her husband, but Brown was away overseas. She painted Ward in her home. “She was wearing this lovely pink silk jacket,” says Williamson. “I thought of having her lying on her sofa but I thought that looked too voluptuous so she sat up. Then she leaned back with her shoulders up and it was just what I wanted. I’m not a lover of green but I thought it really complimented the pink jacket. I only did a couple of sittings but that was enough.”

Born in Brisbane, Williamson now lives in Sydney. She has been painting for 28 years. Her portrait of surfer Tom Carroll was hung in the 2000 Sporting Portrait Prize. She won the Mary of the Southern Cross Portrait competition in Queensland in 2001. Her portrait of singer/songwriter Jenny Morris was hung in last year’s Archibald Prize and was voted the People’s Choice in Sydney and Melbourne.