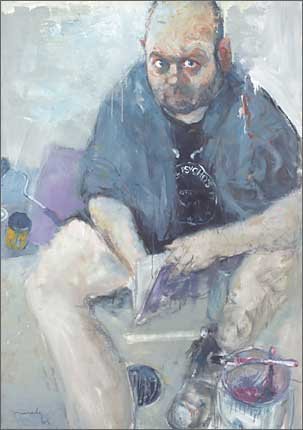 David Naseby has got to know Adam Cullen quite well over the last few years – “much better than I knew him when he won the Archibald Prize three years ago. We’re not great mates but we’ve become friends,” says Naseby. “I’ve become interested in him and the way he paints and what he paints.”

It was when Cullen was painting Anita Cobby’s murderers for an exhibition about Cobby that Naseby began to think about painting Cullen’s portrait.

“I thought how different he was, wanting to paint the murderers. I couldn’t imagine doing it, I don’t think I could handle it. But that’s Adam. It’s the kind of black thing he would do.”

“I wanted to get him in his own environment so the painting reflected him and what he’s doing. He was a very good subject. He sat himself down on a couple of tins of paint and we chatted about the Anita Cobby paintings.” Naseby agrees he has captured a bit of an impish look about Cullen. “He has that. But don’t miss that little bit of insanity in the eyes. He also has that. I think in some ways he feels like he’s having a go at everyone. People ask him how long a portrait took and he says an hour-and-a-half but it goes a lot deeper than that. It’s not about the time it took, it’s about the painting.”

The dripping paint is the result of the way Naseby is attacking work at the moment. “I’m much more spontaneous and aggressive in the way I put paint down so it would have happened anyway but it’s also a good reference to Adam’s style. But I didn’t go for the bold, raw colours that Adam uses. I kept them sombre. It’s the mood I got from him and also, perhaps, the mood I’m in.”

Born in England in 1937, Naseby studied at Northampton Art College. He came to Australia in 1953. After working as a rouseabout in Queensland, he studied at Queensland Art Gallery before moving to Sydney where he worked for various magazines and publishers. He has painted full-time since 1992. He has been an Archibald finalist on four previous occasions and has been in the Salon des Refuses three times, winning the People’s Choice last year. He was also a finalist in the Sporting Portrait Prize in 2000 and a finalist in the Keduma Drawing Prize in 2000 and 2002 and is represented in this year’s Wynne Prize. He has had solo exhibitions at Charles Hewitt Galleries in 1999 and 2000 and was awarded a Bundanon Fellowship in 2002.