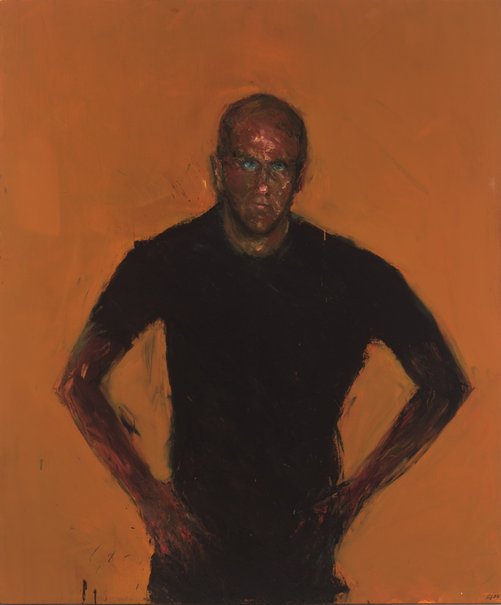 Predominantly a landscape painter, Geoffrey Dyer paints a portrait once a year for the Archibald Prize and likes to choose fellow Tasmanians as his subject. Richard Flanagan is the acclaimed author of books including Death of a River Guide and The Sound of One Hand Clapping. He also directed the film of The Sound of One Hand Clapping. Dyer, served, in part, as a model for the character William Buelow Gould in his most recent novel Gould’s Book of Fish. “This was, in keeping with my friendship with Mr Dyer, an act of optimism,” says Flanagan.

“I’ve known him for a few years,” says Dyer. “The arts community in Hobart is quite small and many of us meet at the local Republic Hotel for a beer. Richard is a local celebrity without trying to be one. With Gould’s Book of Fish, he has really hit the big time.” In the past, Dyer has used backgrounds in his portraits – a darkened theatre for NIDA director John Clark, the landscape of Gallipoli for Gallipoli veteran Alec Campbell. “I decided for this one to cut the background out and just have some colour that reflects the West Coast of Tassie, that deep yellow mustard colour,” says Dyer. “I wanted to get the sense of Richard as a bloke who stands up for himself. He’s a tough character and he doesn’t pull punches. In a fairly conservative town like Hobart, he’s a breath of fresh air.”

Recently Flanagan, along with writers including Peter Carey, withdrew from the 2003 Tasmania Pacific Literary Prize (the nation’s most lucrative literary prize) in protest at the elevation of Forestry Tasmania to a major sponsor of the Tasmanian arts festival, Ten Days on the Island. “I thought I’m going to try and throw the fellow out of the canvas and have him question the viewer,” says Dyer. “I wanted something tough rather than decorative. And that’s the way I went for it.”

Born in Hobart in 1947, Dyer studied at the Tasmanian School of Art. He has exhibited regularly at galleries around Australia since 1970. In 1998, he was part of Out of Australia, a group show seen in Shanghai and the following year was represented in Out of Australia 2000 in Hong Kong. He has been in the Archibald Prize on six previous occasions, the Wynne Prize eight times and was a finalist in the 1997 Sulman Prize. His work is represented in many public and private collections in Australia and overseas.