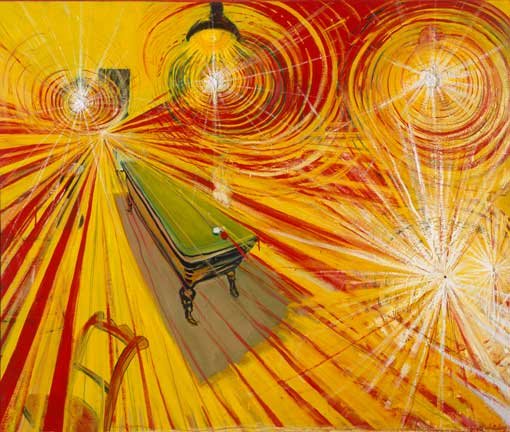 From writers and poets to musicians, photographers and painters, the influences on Whiteley’s art and life were many and varied. Whiteley paid tribute to artists such as Francis Bacon, Henri Matisse and Vincent van Gogh, musician Bob Dylan and poet Arthur Rimbaud using them as subjects and inspiration for his mono-prints, drawings and paintings.

“Whiteley’s visual dialogue with these creative spirits across time, culture and place reflects his insatiable appetite to understand on a deeper level their words, images and music,” said Alec George, coordinator of the Brett Whiteley Studio.

“His explorations resulted in intimate studies that are beautifully rendered. Whiteley would often thread lines from poems or songs into the work to hold a viewer’s gaze – encouraging us to read, observe and consume,” George added.

Whiteley’s homages to his creative peers highlight the deeply personal. Portrait of Joel Elenberg (1980) for example was painted the year that renowned Australian sculptor Joel Elenberg tragically died at the age of 32. The two artists were close friends, and here, Whiteley captures Elenberg in the intimate setting of his studio.

Brett Whiteley: tributes features portraits of other Australians whose work and friendship inspired Whiteley. There are several paintings and drawings of writer Patrick White that speak to the somewhat tempestuous relationship between two of Australia’s most distinguished cultural stars. Lloyd Rees was a friend and source of enormous inspiration for Whiteley and the exhibition includes a portrait of the painter in his later years.

The night café (1971–72) is also on display in Brett Whiteley: tributes. Here Whiteley pays his respects to artistic great Vincent van Gogh and his 1888 masterpiece. Whiteley’s painting takes the same name, but his tribute heightens van Gogh’s choice of colours and strips the infamous night-haunt back to a billiard table and a psychedelic vortex of pendulum lighting intensifying the absinthe stained environment.

Also inspired by van Gogh is the spectacular The starry night (1982) a large scale brush and ink work. In this drawing Whiteley deconstructs the fluid and swirling dynamic of van Gogh’s later period.

The impact of Arthur Rimbaud’s poetry is present in The Rimbaud pages, a series of works that explore the life and work of the French poet. Whiteley manipulates photographs of Rimbaud through screen prints, drawing, text and collage to muse upon the artist’s life and craft visual compositions of his poetry.


Friday – Sunday only
Free admission made possible by J.P. Morgan