Early works of Paris on public display for the first time 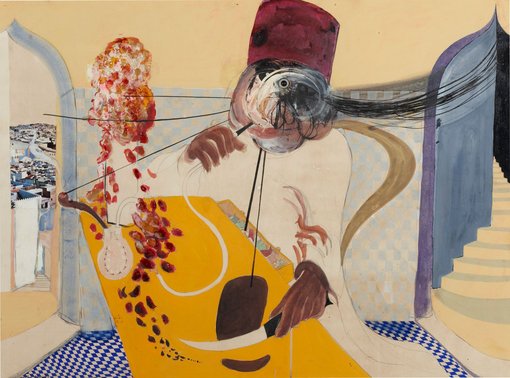 Brett Whiteley: other places at the Brett Whiteley Studio presents a visual diary of Australian artist Brett Whiteley’s travels to New York, Fiji, Tokyo, London and Tangier, alongside a collection of Paris drawings that depict both his early responses to, and last experiences of, the city. Many of these works have never been on public display.

Whiteley travelled extensively throughout his life and recorded his experiences in charcoal, photography and paint. As a young artist he travelled to Paris in April 1960 and made a series of drawings of places around the city and along the Seine. Until this exhibition, this series has remained in the private collection of his late mother, Beryl Whiteley.

Now on public display for the first time, these drawings are presented with the artist’s late Paris series Regard de Cote 1989, which Whiteley created after visiting the city again some thirty years later.

“Whiteley’s early works display his composition, gesture and style, and this emerges with great confidence and draughtsmanship in his late drawings where his expressive qualities are intrinsically part of his repertoire,” coordinator of the Brett Whiteley Studio, Alec George said.

“Whiteley travelled extensively and produced a beautiful range of works with great virtuosity, energy, humour, sensitivity and an intense desire to document his unique vision and experiences,” George added.

Also on display at the Brett Whiteley Studio are rare examples of Whiteley’s work from his time in New York, where he moved in 1967 with his family.

Whiteley used his art to respond to the dynamic environment of New York and the broader issues that America was facing at the time – violent demonstrations against the Vietnam War, civil rights protests and the tragic assassinations of Robert Kennedy and Martin Luther King.

These works include New York 1, which hung in the foyer in the Chelsea Hotel for decades and has only recently returned to Australia; Notes from a sketchbook, New York, which has been in a private collection for the last forty years; and New York 3, which is on display at the Studio for the first time.

A range of works created during Whiteley’s travels to Fiji, London, Tangier, Bali and Japan are also on display.