‘This landmark exhibition presents one of the liveliest and most distinctive periods in the history of Australian art,’ said Daniel Thomas AM, art historian.

In the years between the two world wars, Sydney was a thriving modern metropolis. By the 1920s its population had grown to one million and its urban environment was being transformed by exciting new structures, including the Sydney Harbour Bridge, modern transport and David Jones’ new flagship store on Elizabeth Street. The Home magazine, launched in Sydney in 1920, became the source for all things stylishly modern, promoting the latest ideas in design, furniture, fashion and art.

Progressive artists in Sydney responded to this new cosmopolitan milieu. They explored and promoted modernity, modernism and the international style moderne in their work through revolutions in colour and light, and through the developing forms of abstraction. Their diverse works present the dynamic patterns of Sydney’s urban life under light-filled skies or coloured interiors as new realms of visual experience.

Sydney moderns: art for a new world showcases more than 180 of these early modern works by Australia’s most celebrated and respected artists. Spanning the years between 1915 and the early 1940s, the exhibition presents the diverse and versatile forms of Sydney modernism and considers their relationship to modern Australian life, to nationalism and internationalism, and to Australia’s dominant artistic genre, landscape painting.

The rich collection of modern Sydney art at the Art Gallery of NSW is augmented by works borrowed from Australia’s major public galleries and private collections.

In addition to paintings, prints, photography and sculpture, Sydney moderns features artists’ work in design and the decorative arts – including the arresting cover images designed by artists such as Margaret Preston, Adrian Feint and Thea Proctor for The Home magazine. This cross-disciplinary approach was central to the modernist movement.

Also featured are the striking experiments in colour painting undertaken by early modern artists exploring the correspondences between colour and music. These experiments led to Australia’s first abstract paintings in 1919.

Sydney moderns is organised by Deborah Edwards and Denise Mimmocchi, curators of Australian art at the Art Gallery of NSW. Deborah’s previous curatorial projects include the acclaimed Margaret Preston exhibition held at the Gallery in 2005, and Denise the recent comprehensive exhibition Australian Symbolism.

Sydney moderns is accompanied by a major book, published by the Art Gallery of NSW, which elaborates on the themes of the show – its artists, their preoccupations, and the design and architectural work of the time. Generously illustrated, the book has five major essays by Deborah Edwards, Denise Mimmocchi and Terence Maloon, and contributions from more than 30 specialist writers.

In conjunction with Sydney moderns, the Gallery will present an extensive series of events, activities and programs, including Art After Hours. Highlights include celebrity and artist talks, films and music, walking tours and plein-air sketching sessions to locations represented in the exhibition.

Sydney moderns: art for a new world is sponsored by the Art Gallery Society of NSW in celebration of its 60th anniversary, and presented in partnership with Destination NSW.

'The exhibition is a wonderful celebration of our glorious harbour city,’ said the Hon Barry O’Farrell, Premier of NSW. 'The works reflect a time when Sydney was modernising and beginning to emerge as a sophisticated city of the world with projects such as the building of the Sydney Harbour Bridge, an underground city rail system and grand department stores. Sydney moderns is a visual feast showcasing the confidence and style of the times. The NSW Government, through our tourism and major events agency Destination NSW, is proud to bring this outstanding exhibition to Sydney at the Art Gallery of NSW.’ 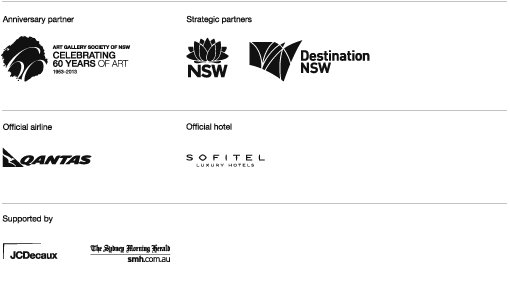