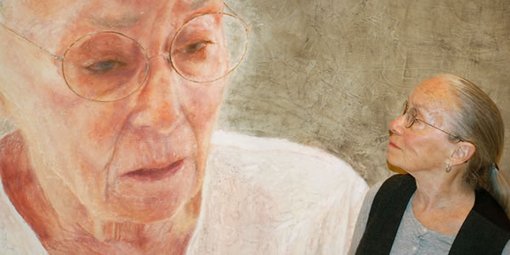 Jenny Sages with her self portrait After Jack. Photo credit: Bruce Inglis

Sydney artist Jenny Sages has won the 2012 Archibald People’s Choice Prize for her self-portrait, After Jack.

‘Jack’s portrait was very personal and meaningful and I was so deeply in my grief that the idea of painting another portrait seemed trivial. A painting for me is a circle not closed until somebody sees the work, carrying their own baggage, thereby sharing my grief. I lost my husband Jack having shared 55 years together – he was my rock. Anything else I would paint for the Archibald seemed trivial to me, hence my self-portrait called after Jack. I am overwhelmed and moved for this recognition.’ – Jenny Sages

Each year a voter for the Archibald painting that receives the most votes is selected to win a prize – this year, $2500 plus a $1000 ANZ Visa Debit Card and one night’s accommodation at the Sofitel Sydney Wentworth.

‘Why I and my son Dominic (there was no dispute) chose Jenny’s beautiful work After Jack: It was the emotional connection that transcended mere illustration and skill, and made me immediately drawn to this beautiful portrait. It speaks of quietly contained, but deeply felt profound loss and grief. While it is clearly her grief – she looks down, unaware of any of us looking at her – it also makes a very personal connection – with the loss that all of us has felt, or will feel at some time.

‘I love this work; Jenny has used no “bells and whistles” or intellectual cleverness to draw attention. It is the profound human connection that makes this such a special portrait for me.’ – Robyn Killin McAuliffe

Born in Shanghai of Russian parentage, Sages came to Australia in 1948. She studied at East Sydney Technical College and the Franklin School of Art in New York. After freelancing as an illustrator for 30 years, she has painted full-time since 1985. She has been highly commended in the Archibald Prize eight times, most recently in 2006 for her portrait of artist Hossein Valamanesh. She won the Wynne Prize in 2005 and is represented in this year’s Wynne Prize. She also won the Portia Geach Memorial Award for portraiture in 1992 and 1994. Her work is represented in numerous public and private collections, including the Art Gallery of NSW and the National Portrait Gallery, Canberra.

See it free
Become a member