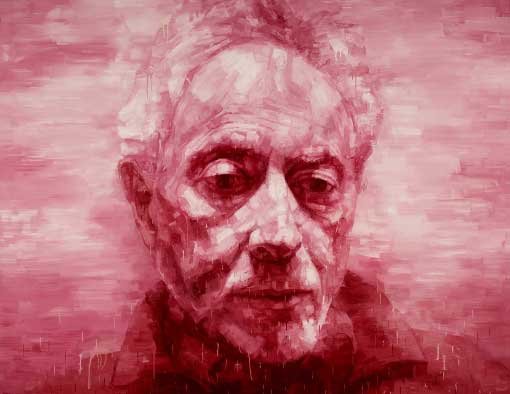 J M Coetzee migrated from South Africa to Australia in 2002 and became an Australian citizen in 2006. Currently an Honorary Visiting Research Fellow in the English department at the University of Adelaide, Coetzee was awarded the 2003 Nobel Prize in Literature and has the rare distinction of winning the Man Booker Prize twice, in 1983 for Life & times of Michael K and in 1999 for Disgrace.

Coetzee and Adam Chang are both supporters of Voiceless, the independent, non-profit organisation dedicated to alleviating the suffering of animals in Australia. They hold similar values concerning the protection of animals and are also united by their spirit of compassion and kindness towards their fellow human beings.

While Coetzee is a very private person, Chang was fortunate to enjoy an afternoon with him in Adelaide and found that his eyes reveal a deep serenity and an insight into the human condition, qualities the artist has attempted to capture in this portrait. In contrast, the strong, red brushstrokes act as a powerful symbol of both artist’s and subject’s sensitivity to, and experience of, the violence and discrimination that exist in our world.

Chang (Hong Jun Zhang) was born in Shanghai in 1960 and is now based in Sydney. He researched world painting at Shanghai University from 1989 to 1993. Since the early 1980s, he has been represented at major national exhibitions throughout China. Awards include the 1992 Shanghai Art Prize. Chang migrated to Australia in 1997. He has twice been selected as a finalist in the Doug Moran National Portrait Prize, where he was highly commended by the international judge in 1998 and voted as a favourite portrait in 2000. He recently held a solo exhibition called Mao, terracotta warriors & myself, which showcased his new, strong and resonant experimental work. This is his fifth time as a finalist in the Archibald Prize.

Each year a voter for the Archibald painting that receives the most votes is selected to win a prize – this year, $2500 plus a $1000 ANZ Visa Debit Card and one night’s accommodation at the Sofitel Sydney Wentworth. The lucky winner is Ruth Anstice from Mosman.

This is the 23rd year of the People’s Choice, with 22,593 people voting. Jenny Sages’ portrait of her late husband Jack was the second most popular painting.