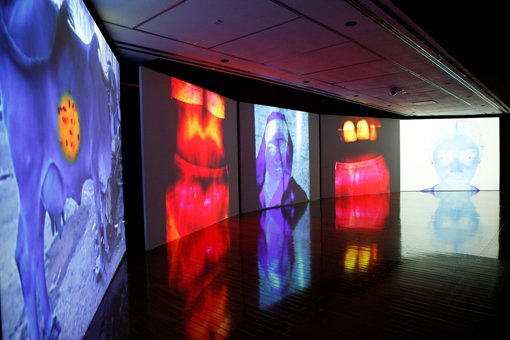 Nalini Malani is an influential Indian artist whose multi-media works focus on issues including identity, gender, migration and political violence. A major work of hers, Mother India: transactions in the construction of pain 2005, together with other earlier videos recently acquired by the Gallery, are now presented for the first time in Sydney as an introduction to Malani’s work and concerns. These works complement two suites of drawings by Malani in the Gallery’s collection: The Degas Suite 1992 and Lohar Chawl 1991 – both acquired after being exhibited in the exhibition India songs in 1993.

Born in 1946 in Karachi, then India but now Pakistan, at the time of Partition, Malani suffered with her family as they experienced the displacements of that traumatic time. Her early experiences were a seminal influence on her future work, as was education at the JJ School of Art in Bombay and time in Paris and beyond. Malani has exhibited on an international stage, including in the 1996 and 2002 Asia-Pacific Triennials at the Queensland Art Gallery. Most recently her work was included in a major exhibition at the Pompidou Centre titled Paris-Delhi-Bombay and this year she will take part in the 13th dOCUMENTA in Germany.

Nalini Malani’s Mother India: transactions in the construction of pain is on an impressive scale. The five screens are arranged in a mesmerising semi-circle that is overwhelming to the viewer. They show footage of women spinning from the time of Partition, as well as flags, the face of Gandhi and refugees carrying all their belongings on their heads. These are interspersed with religious icons and metaphorical images, such as a woman’s face with teeth projected over her eyes and throat. The sequence closes with scenes of a destroyed landscape after the 2002 riots in Gujarat. The work confronts violence during the 1947 Partition of India and Pakistan and contemporary India.