Mikala Dwyer: a shape of thought 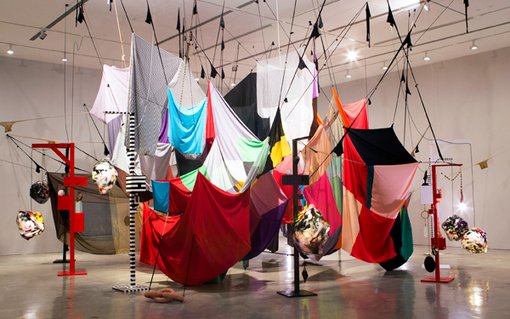 The Art Gallery of New South Wales is pleased to announce A shape of thought, an exhibition of new and recent works by Mikala Dwyer, one of Australia’s most significant contemporary artists.

Sydney-based Dwyer began exhibiting in the mid-1980s and has developed a distinctive and highly engaging international sculptural practice that explores ideas about shelter, childhood play, modernist design and the relationship between people and objects.

Dwyer’s works incorporate raw materials and found objects in inventive and unexpected ways that transform their architectural settings. For A shape of thought Dwyer co-opts both the everyday and the fabulous – floating 150 silver balloons high above the Gallery floor, installing an elaborate suspension of fabric shapes held aloft by stockings, and building a large circular sculptural gathering that includes Perspex crystal-like structures.

Art Gallery of NSW director Michael Brand said A shape of thought follows Julian Rosefeldt’s Manifesto as the second in a new series of exhibitions for the Gallery that present new and recent work by significant Australian and international contemporary artists.

“The Gallery is committed to presenting the work of the most exciting artists of our time. Mikala Dwyer has made an exceptional contribution to sculptural practice and her work is always unexpected and mind-expanding,” Brand said.

“Mikala first exhibited at the Gallery as part of Australian Perspecta 1993 when her work memorably dressed our vestibule columns in gaudy sequin fabric and covered the floor in rubber bath mats. So expect the unexpected – A shape of thought is bound to change your perspective of the everyday,” Brand added.

Wayne Tunnicliffe, exhibition curator and head curator of Australian art said the exhibition is thought-provoking and even challenging at times.

“Mikala Dwyer’s sculptural practice is richly inventive. She creates objects and installations that are both playful and provocative, reimagining familiar materials and what they say to us about the world in which we live,” Tunnicliffe said.

“Dwyer’s works are often beguiling in their colour and profusion, but haunt us long after we encounter them, as the ideas they embody unfold over time,” Tunnicliffe added.

Dwyer said she is delighted to see such a significant collection of her works presented at AGNSW.

“It is exciting to see my new sculptures on display alongside other works from recent years; it is rare for an artist to be able to view bodies of work together,” Dwyer said.

“A shape of thought continues my explorations into the consciousness and liveliness of the matter that surrounds us,” Dwyer added.

A free art making activity for families, Drop in and make: Sculptural shapes and fantastic forms, is offered on Sunday 3 and Sunday 17 September any time between 11am and 4pm. Take home your own colourful structure using fantastically coloured fabric and papers.

There are two free Access programs offered as a part of this exhibition. Taking place on Wednesday 11 October, Playful forms, an artist-led experience for adults with specific needs, inspires participants to express their own creativity and make art in response to the Dwyer’s playful sculptures.

Art and dementia tour and workshop Playful possibilities is also offered on Thursday 16 November, providing discussion and artmaking for people living with dementia.

A shape of thought is accompanied by a 128-page book published to document the new work on display. It features an extensive interview with Mikala Dwyer, full colour illustrations and essays by Wayne Tunnicliffe, Helen Hughes and Susan Best.

Dwyer has established a significant and prominent practice with many solo and group exhibitions in Australia and internationally.

She is also a highly regarded art teacher in Sydney and has held positions as lecturer at the University of Western Sydney (1995-1999) and the Sydney College of the Arts, The University of Sydney, (1999-current).

Mikala Dwyer is supported by:

A Visual Arts Fellowship administered by the National Association for the Visual Arts (NAVA) and funded through the Copyright Agency’s Cultural Fund; The Australian Government through the Australia Council, its arts funding and advisory body; and Carriageworks and Urbangrowth NSW through The Clothing Store Artist Studio program.