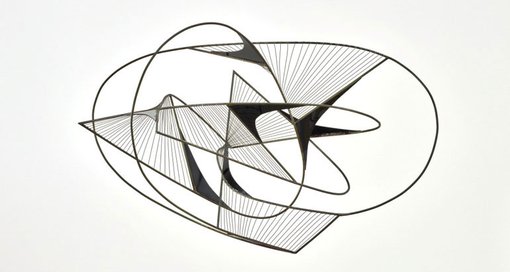 The Art Gallery of New South Wales is delighted to announce Margel Hinder: Modern in Motion, the first retrospective of one of Australia’s most important and dynamic, yet underrated, modernist sculptors of the 20th century.

The exhibition, presented in collaboration with Heide Museum of Modern Art in Melbourne, showcases an arresting array of sculptures by Margel Hinder (1905 – 95) produced over five decades of her career.

From the solidity and volume of her wood carvings in the 1930s, to the ‘space age’ kinetic and wire works of the 1950s and her major public commissions in the 1960s, Margel Hinder: Modern in Motion traces the development of Hinder’s creative vision and her exploration of sculptural languages.

Art Gallery of NSW director Dr Michael Brand said the exhibition aims to rectify Hinder’s profile as one of the most underestimated Australian sculptors of the 20th century.

“Margel Hinder was an agent for cultural change and part of the first generation of abstract artists in Australia. This important retrospective reveals how vital Hinder was in the making of Sydney’s modernism and for asserting the place of sculpture within it,” Brand said.

Harding said the exhibition uncovers the expansive nature of Hinder’s creativity, and her skill in giving sculptural form to universal concepts like time and motion in materials expressive of the era.

“Apart from her inclusion in a few surveys of local modernism, Hinder’s vanguard practice and its legacy have largely been overlooked since the 1980s. This exhibition presents her innovative and visually arresting sculpture to new generations and the wide audience it deserves.”

Mimmocchi said the exhibition is an opportunity to explore the breadth and depth of Hinder’s oeuvre.

“Margel Hinder: Modern in Motion brings together major sculptures from public and private collections, immersive representations of public sculptures, maquettes, drawings and archival photographs to present an insightful portrait of the pioneering sculptor’s life and work.”

“The Art Gallery of NSW has a substantial collection of Hinder’s maquettes that reveal incredible details of her creative processes. We are excited to have recently completed conservation on more than 40 of these maquettes so that they can be exhibited,” said Mimmocchi.

Born in Brooklyn, New York, Hinder (née Harris) initiated her sculpture studies in Buffalo and Boston. She migrated to Australia in 1934, following her marriage to Australian artist Frank Hinder, where her mature practice flourished.

Exhibition highlights include Hinder’s commanding kinetic works, whose slow rotations encapsulate a sense of the world in perpetual motion, and an immersive installation based on two of Hinder’s major public sculptures.

Created by environment designer and 3D artist Andrew Yip, the life-size digital reconstructions are of two of the most significant public sculptures of Hinder’s career: the Civic Park fountain, Newcastle 1961–66 and the now decommissioned Northpoint fountain 1975. This project allows for a presence of this important component of Hinder’s art within the context of her retrospective while also demonstrating the dramatic shift in the style and scope of Hinder’s art in monumental and water kinetic sculpture.

On view
until 2 May 2021
Art Gallery of New South Wales
Art Gallery Road, The Domain, Sydney