Mad through the darkness

Australian artists and the Great War 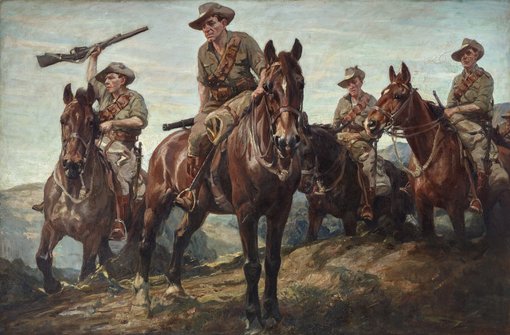 Septimus Power The enemy in sight 1916

To commemorate the one hundredth anniversary of the ANZAC landing at Gallipoli on 25 April 1915, the Art Gallery of New South Wales presents Mad through the darkness: Australian artists and the Great War from 25 April until 11 October 2015.

Drawn from the Gallery’s collection, Mad through the darkness explores the complexity and diversity of visual responses by Australian artists to the conflict, both during and in the aftermath of the First World War.

Curator of Australian and Pacific Art Natalie Wilson said, “Mad through the darkness commemorates all of those whose lives were irrevocably affected, from the soldiers on the battlefields to those who commanded the home front. It explores work by artists who grappled with the aftermath of such devastation, and those who investigated the legacy of Australia’s military history decades after the war ended.”

The exhibition includes works by official Australian war artists, including Will Dyson, George W Lambert, Arthur Streeton, Fred Leist and Septimus Power, who were assigned the task of creating a visual record of Australia’s armed forces in action, depicting grand battle scenes in which patriotism and heroism were lauded.

A group of Will Dyson’s portfolio of lithographs, commissioned by the Australian Government and acquired by galleries across Australia, are a vivid pictorial record of the Western Front. They demonstrate his deep admiration for the Australian soldiers he encountered, finding wit and repartee in the midst of loss and devastation.

Battle sites in Europe and the Middle East were the subjects of works by Streeton and Lambert, who vividly related the diverse landscapes encountered by the ANZAC forces. Other Australian artists, Napier Waller and Roy de Maistre, who volunteered for the Australian Imperial Force, created deeply personal images that reveal a compassionate view of the experiences of Australian soldiers both in the trenches and away from the frontline.

The display also presents a selection of paintings in oil by Evelyn Chapman, the first female Australian artist to visit Europe’s battlefields following the war. Chapman’s vivid renditions of the devastation she encountered in the cities and villages along the Western Front were recently bequeathed to the Gallery by the artist’s daughter, and are shown for the first time in a century.

Alongside these works will be Sidney Nolan’s monumental 1957–58 painting The galaxy, which depicts soldiers swimming at ANZAC Cove as exploding shells light up the vast expanse of inky darkness. The inclusion of Nolan’s painting alongside works created around the First World War reminds us of Australia’s long military history and provides an opportunity to revisit its cultural legacy in the present day.

The title of the exhibition is taken from Australian poet Douglas Stewart’s poem War is a time of decision. Have we not rushed, from his collection Sonnets to the unknown soldier. Written during the Second World War, Stewart questions the judgments that led to the Great War and the failures of politics that led to another.

The Gallery has also created two digital exhibitions on Google Cultural Institute to showcase some of the incredible stories behind the artworks in Mad through the darkness.

For further information on Mad through the darkness or the Gallery’s programs exploring the First World War, please visit our World War I remembered program page.