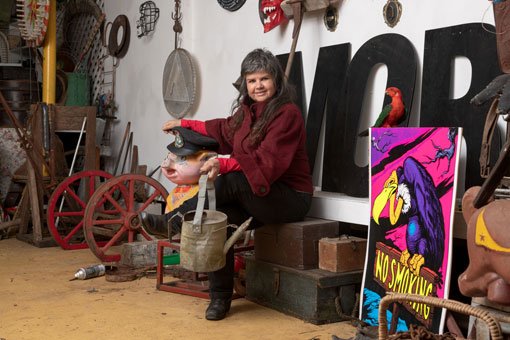 The Art Gallery of New South Wales is proud to announce that cross-cultural Wiradjuri woman Karla Dickens, one of Australia’s most exciting artists, has been invited to create a new contemporary work for the Gallery’s entrance.

The work will be launched in 2021 to coincide with the Gallery’s 150th anniversary celebrations. Located in the empty niche above the front door for a period of three years, Dickens’ work will be one of the first visitors encounter as they cross the threshold into the Gallery.

Dickens’ preliminary concept for the facade, To see or not to see 2019, is a powerful exploration of her female and Aboriginal identity and the continuing legacy of colonialism.

The concept has been on display at the Gallery for the past five months in the free exhibition, Dora Ohlfsen and the facade commission. It is on view until 5pm on Sunday 8 March, International Women’s Day and the final day of the exhibition.

The exhibition provided visitors the unique opportunity to explore the story of the empty niche on the Gallery’s facade and proposals by six contemporary New South Wales women artists, including Dickens, for a possible new commission.

Each artist reflected on the story of the original facade design by female artist Dora Ohlfsen, which was commissioned in 1913 by the Gallery trustees, but never realised. One hundred years later, this significant space for sculpture on the Gallery’s facade remains empty.

For the next 12 months, Dickens will work with the Gallery to develop her original concept for its location in the niche on the sandstone facade of the Walter L. Vernon designed building.

Art Gallery of New South Wales director, Dr Michael Brand, said the commission was one way the Gallery was redressing the representation of women artists in the collection.

“Every day we are working to provide visitors new opportunities to see more great works by women artists, and I will be proud to have Karla’s work displayed prominently at the entrance to our much-loved historic building. I congratulate Karla and look forward to seeing her progress over the next twelve months as she develops her original concept to a final work,” Brand said.

“Aside from the very great pleasure of seeing the artists’ work in the exhibition, the Gallery’s curatorial staff very much enjoyed weighing up the considerable merits of each of the contributions. They were all such thoughtful responses,” Brand added.

The facade commission is an example of the way the Gallery is rethinking its approach to the display of art in the future, creating a new and exciting art journey across both buildings ahead of the completion of the Sydney Modern Project transformation in 2022.

Dickens said she was very pleased to have her concept selected for the front of the Gallery and was looking forward to developing it.

“The work is about women and invisibility, something just as much an issue today as it was in Dora Ohlfsen’s time. The year of her commission in 1913 was the year my grandmother Myrtle was born. She and her family were constantly hiding or being hidden, forced to mask their indigeneity. The issues she faced continue as the legacy of Aboriginal women today, and it’s important to me, and to all New South Wales Aboriginal artists, to have this chance to speak,” Dickens said.

Exhibition curator Jackie Dunn said the opportunity to work closely with Dickens on her commission is an extraordinary one.

“Karla is one of the most compelling artists working in Australia today, and one with such sensitive insights into the lived experience of women – specifically of Aboriginal women – that she will bring both potency and poetry to what is a very public site. Her person and her work are marked as much by warmth and compassion, as by a powerful capacity to stir and unsettle,” Dunn said.

Currently creating a major installation at the front of the Gallery for NIRIN: the Biennale of Sydney 2020, Dickens obtained her Bachelor of Fine Arts, National Art School, Sydney in 2000. She has been included in such important survey exhibitions as Defying Empire, 3rd National Indigenous Art Triennial 2017-20 at the National Gallery of Australia (with her work Assimilate Warriors acquired), and The National: new Australian art, Carriageworks, Sydney, 2017. Dickens also has a significant work in the current Adelaide Biennal of Australian Art: Monster Theatres, at the Art Gallery of South Australia.