Dora Ohlfsen and the Art Gallery of NSW facade commission 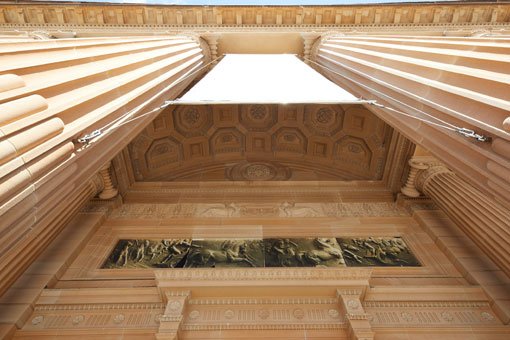 Art Gallery of NSW facade with a reproduction of Dora Ohlfsen’s Plaster cast of Greek chariot race c1918 in place above the entrance doors.

The Art Gallery of New South Wales is delighted to present Dora Ohlfsen and the facade commission an exhibition that explores the story of the empty niche on the Gallery’s facade and proposals from six contemporary artists for a possible new commission.

Architect Walter Vernon’s 1901 plan for the Art Gallery of NSW facade specified a bronze sculpture to be placed above the entrance doors. In 1913 the Gallery trustees commissioned expatriate Australian sculptor Dora Ohlfsen to sculpt a classical Greek chariot race in low relief. It was to be Ohlfsen’s one major Australian commission and her designs were approved but the artwork was never realised.

One hundred years later, this significant space for sculpture on the Gallery’s facade remains empty. Dora Ohlfsen and the facade commission introduces Ohlfsen’s once-celebrated work and the history of the commission, alongside new proposals for the space by six contemporary women artists from New South Wales.

The artists whose creative concepts will be on display as part of the exhibition are Karla Dickens, Deborah Kelly, Sanné Mestrom, Caroline Rothwell, Julie Rrap and Shireen Taweel.

Art Gallery of NSW director Dr Michael Brand said the exhibition is an opportunity to recognise Ohlfsen as an important Australian artist and reconsider the experience of arrival to the Gallery.

“During her lifetime, Dora Ohlfsen was one of the world’s most highly regarded sculptors of medallions and a key figure for a generation of ambitious Australian women. Yet like many women artists, Dora Ohlfsen has suffered when it comes to the records of art history,” Brand said.

“This exhibition also begins our thinking about the future of the Gallery’s facade, with six women artists who have been invited to reflect on Dora’s life and work. Their speculative responses are fascinating in the diverse interpretations of Dora’s personal history as a woman artist, the unrealised scuplture and the importance of this space at the threshold to the Gallery,” added Brand.

Born in 1869 in Ballarat, Ohlfsen moved to Sydney with her family and then left for Berlin, aged 23, to pursue a promising musical career. In 1896 Ohlfsen moved to St Petersburg, home to the woman who would become her lifelong partner, the wealthy and well-connected Elena von Kügelgen. During Russia’s pre-revolutionary ‘Silver Age’, Ohlfsen worked for the US Consul-General, taught music and wrote articles on theatre and art.

In 1902 Ohlfsen and von Kügelgen moved to Rome, where they would stay for over 40 years. It was in Rome that Ohlfsen quickly achieved success as a medallion maker with her work collected and commissioned by the French and Italian governments; British prime ministers; celebrated poets and artists and the Art Gallery of NSW.

During World War I Ohlfsen was a nurse with the Red Cross and she created a commemorative medal honouring the Anzacs that became her most famous work. In 1923 Ohlfsen was commissioned to design a fascist war memorial for the naval base of Formia, near Rome, which was reported to be the only public work in Europe by a woman artist and the only war memorial at the time to be executed in Italy by a foreigner.

Art Gallery of NSW special exhibitions curator Jackie Dunn said that back home in Australia Ohlfsen was an exotic and popular figure who frequently appeared in the press.

“Dora once told a reporter she spent her life proving ‘it was possible for a woman to succeed in life without the help of men.’ The cancelling of the facade commission would be the greatest disappointment of her distinguished international career,” Dunn said.

“There are few surviving works by Dora and all that remains of her concept for the Gallery’s facade are photographs of the full-scale plaster casts. This exhibition draws together these objects with Dora’s personal history and the reflections of six contemporary artists to reveal an incredibly rich story of female determination and triumph in the early 20th century,” added Dunn.

Dora Ohlfsen and the façade commission showcases works by Ohlfsen and her contemporaries; the story of the Gallery’s unfinished facade design and the six new proposals for the sculpture by contemporary artists, Karla Dickens, Deborah Kelly, Sanné Mestrom, Caroline Rothwell, Julie Rrap and Shireen Taweel.