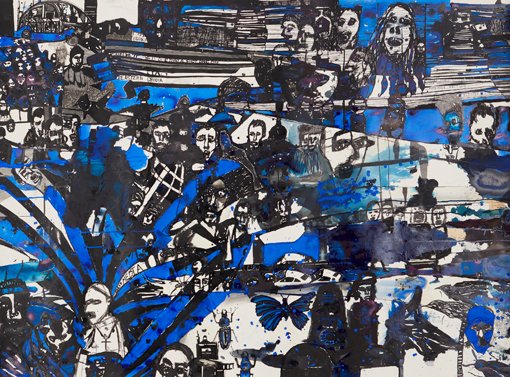 The Art Gallery of New South Wales is delighted to announce Playback the third Dobell Australian Drawing Biennial, from 7 July until 21 October 2018.

Continuing the legacy of the Dobell Prize for Drawing and supported by the Sir William Dobell Art Foundation, this exhibition presents new work by eight contemporary Australian artists who are exploring history through crossovers between drawing and the moving image.

“By reanimating images from the past, the artists selected for Playback enliven our sense of curiosity about history but also encourage us to understand the ways in which history repeats itself,” said Art Gallery of NSW curator Matt Cox.

“There are drawings in Playback that also invoke the moving image as they unfold and reform in a process of recycling, and in so doing, the image, rather than being recovered or restored, becomes something other,” added Cox.

Playback showcases the most recent work in Vernon Ah Kee’s ongoing Unwritten series, in which his ghostly drawings of faces stand as a testament to the violence of the 2004 Palm Island riots, while Sharon Goodwin’s work breaks away from the two dimensional realms normally associated with drawing in her re-contextualising of the story of the Egyptian-born St Anthony the Great.

Ingrid Bergman and Rita Hayworth are among the women populating Laura Hindmarsh’s drawings that record the artist’s online experiences with cinematic cult-classics in which the female protagonist appears doubled or mirrored in the camera frame.

Locust Jones considers our consumption of current events as he uses a bamboo nib to create a scrolling visual ticker tape of the 24-hour news cycle. Jones’ expansive drawing is a visual diary of the events and people that made the daily news, from New Year’s Eve to April Fools’ Day 2018.

Dorota Mytych uses sand to create a mesmerising series of moving drawings in which images of constellations, cups, landscapes and famous artworks appear and disappear, while Jason Phu brings humour to the exhibition with his cheeky drawings and performance inspired by bathroom wall graffiti and Chinese folklore.

Graphite drawings by Lucienne Rickard are executed on drafting film through an obsessive and laborious process, recording her memories of loved ones and the pain of loss.

Nick Strike recreates 24 frames from Luis Buñuel and Salvador Dalí’s surrealist film Un chien Andalou (1929) so viewers can reanimate them with a smartphone – evoking the pre-cinema technology of the flip-book where still images are made to move with thumb pressure.

Drop in and make: Fabulous flip books
Saturdays 7, 14 July 11am-1.30pm
Free artmaking activity for families
Join artist Jason Phu, whose art is on display in Playback: Dobell Australian Drawing Biennial 2018, and work alongside him to create a dynamic flip book inspired by his drawings and pictograms.
Join us any time between 11am and 1.30pm. For children with their parents or carers. All materials and instructions provided.

Art and dementia: Playback
Thursday 19 July 2018, 11am
Discussion and artmaking for people living with dementia and their care partners.
Explore and discuss works in Playback: Dobell Australian Drawing Biennial 2018, and take part in an artist-led artmaking session inspired by the exhibition.
Offered to individuals with their care partners as well as groups, this tour is particularly for people living with younger-onset dementia. It will provide intellectual stimulation and encourage self-expression with an opportunity for participants to articulate their opinions about what they experience.
A regular program of art and dementia events is held throughout the year on the third Thursday of the month, with a different focus each month.
Free, bookings required

Auslan tour: Playback
Sunday 26 August 2018, 1.30pm
For visitors who are deaf or hard of hearing
Join Dr. Riona Tindal, artist from the Deaf community, for a tour of Playback: Dobell Australian Drawing Biennial 2018. The tour will be delivered in Auslan and interpreted into English.
Meet at information desk.
A regular program of Auslan-interpreted events is held throughout the year on the last Sunday of the month (except December), with a different focus each month.
Free, bookings recommended

Additional public programs in association with Playback to be announced.

In association with Playback: Dobell Australian Drawing Biennial 2018, the Gallery Shop has collaborated with contemporary artist Jason Phu to launch a limited-edition scarf and tote bag.

Featuring artwork created by Phu based on his work for the exhibition, the i drew this, and then i died scarf is a sheer black modal cashmere, and the matching cotton canvas tote have been produced in an exclusive run of 100 numbered editions.