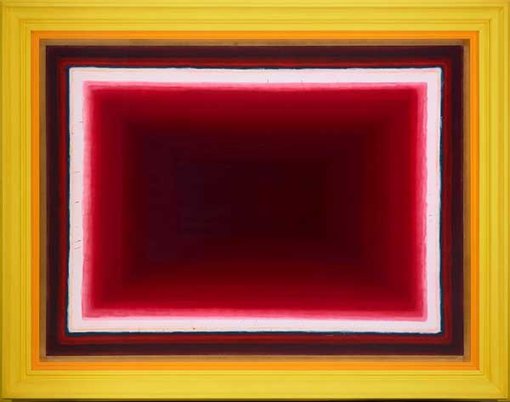 Tomislav Nikolic Just before the most significant events, people are particularly prone to deny the possibilities of the future. (cause all we’re doing is learning how to die) 2014-17 acrylic polymer, marble dust, 24ct gold leaf, 12ct white gold leaf, copper leaf, museum acrylic on canvas and wood, 186.4 × 236.5 × 17cm

Bulgari Art Award Dinner, Sydney: Art Gallery of New South Wales director Dr Michael Brand this evening announced that one of Australia’s finest colour painters, Tomislav Nikolic, is the recipient of this year’s $80,000 BVLGARI ART AWARD for his painting Just before the most significant events, people are particularly prone to deny the possibilities of the future. (cause all we’re doing is learning how to die) 2014-17.

The Bulgari Art Award is awarded annually to support mid-career Australian painters. Sponsored by Bulgari, the award consists of $50,000 for the acquisition of a painting for the Gallery’s collection and a residency for the artist in Rome, Italy, valued at $30,000. The Bulgari Art Award, now in its sixth year, is one of the most valuable and prestigious art awards in Australia.

“We see the Bulgari Art Award as both a celebration of, and support for, Australia’s visual artists and a unique opportunity for Bulgari to assist to strengthen the Art Gallery of New South Wales’s permanent collection,” managing director of Bulgari Australia Brad Harvey said.

“Tomislav Nikolic’s work is an extraordinary example of his signature form of abstraction and we are delighted to announce him as the 2017 recipient of the Bulgari Art Award,” Harvey added.

Michael Brand said Tomislav Nikolic is one of Australia’s greatest colour painters and his painting for the 2017 Bulgari Art Award is a sublime example of how experiential the painting medium can be.

“The chromatic intensity that Tomislav builds using hundreds of layers of paint results in an incredible and deeply physical experience – an experience we know our visitors will relish and we are delighted to receive it into our collection,” Brand said.

“Nikolic’s practice is research based and the chromatic origin point for his painting was Caravaggio’s Judith beheading Holofernes, which was also painted over four years, from 1599 to 1602.

The pigeon blood red at the centre of Nikolic’s canvas has a source in the red curtain and the red spurt of Holofernes’ blood that anchors Caravaggio’s composition. Nikolic has moved far from the Caravaggio though to arrive at his abstract painting, while retaining a sense of drama anchored purely in intense colour rather than in subject and composition,” added Tunnicliffe.

Nikolic has used gold leaf in the painting’s frame slip to add a further differing interplay of colour and light into the dazzling chromatic mix. By incorporating the gilded and coloured framing Nikolic challenges the traditional neutrality of framing devices and instead emphasises a holistic experience of the painting and frame as one work.

The 2017 Bulgari Art Award recipient, Tomislav Nikolic, is thrilled with the announcement of the award.

“I would like to thank Bulgari for its generous and ongoing support of Australian artists. The Bulgari Italian residency will provide incredible opportunities for my practice and it is a great honour to have my work become a part of the Art Gallery of NSW collection,” Nikolic said.

Tomislav Nikolic (born 1970, lives Melbourne) is known for paintings that not only explore colour’s capacity to deliver metaphorical and symbolic narratives but also its potential to express physical presence and character. Over recent years his career has grown significantly with exhibitions in Australia and New Zealand, in Germany and forthcoming in Spain. Nikolic’s approach to the ‘object’ nature of the painting, his co-opting of sometimes elaborate frames into the body of the painting, draws connections to artists such as Howard Hodgkin and David Hockney. Nikolic’s tidal accretion of colour, radiating from a deep chromatic interior towards the edges and eventually onto the wall through reflections, is entirely his. Nikolic’s work is held in the National Gallery of Victoria and The Auckland Gallery, Toi o Tamaki as well as collections throughout Australasia, Asia, Europe and America.

Bulgari was founded in Rome in 1884 as a single jewellery shop, whose magnificent jewellery creations soon became emblems of Italian excellence. Throughout the last few decades Bulgari developed into a global luxury brand renowned for its highly creative design in jewels, watches and accessories, and retailing in the major luxury retail precincts of the world. Up until 2011 Bulgari was majority-owned by the Bulgari family and, though it is now part of the LVMH Group, the Bulgari family are still instrumental in the management of the Bulgari brand and the design of jewellery. International success has carried the distinctive Bulgari design into a diversified portfolio of products and services and, increasingly, hotels.