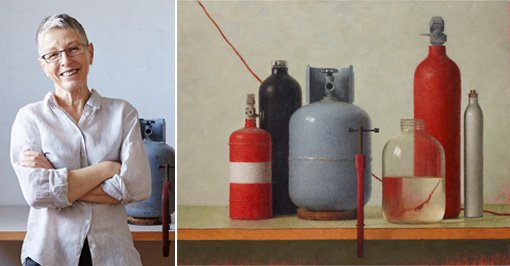 The Bulgari Art Award is awarded annually to support mid-career Australian painters. Sponsored by Bulgari, the award consists of $50,000 for the acquisition of a painting for the Gallery’s collection and a residency for the artist in Italy valued at $30,000.

“I am delighted to be present for this year’s announcement of the Bulgari Art Award and to encounter Jude Rae’s captivating still life,” Harvey added.

Suhanya Raffel said the Bulgari Art Award is a significant annual art award, providing a rare opportunity for an Australian artist to create a work for the Art Gallery of New South Wales, as well as enjoy an extraordinary artist residency in Rome.

“Now in its fifth year, the Bulgari Art Award, judged by Gallery Trustees and senior curatorial staff, is one of the most valuable art awards in Australia and highlights Bulgari’s generous support of contemporary Australian painting.

“I congratulate Jude Rae on winning the 2016 Bulgari Art Award. We are excited that her painting SL 359 will now join our collection and be enjoyed by generations of visitors to come,” Raffel said.

Art Gallery of New South Wales director Michael Brand said, “Jude’s paintings have accurately been described as slow-burning. They take a venerable and familiar form such as the still life, and draw the viewer into a deeper contemplation of the nature of perception, consciousness and being, through canvases of quiet, meditative beauty.”

With an exhibition history spanning over 30 years Rae’s paintings have graced the walls of galleries in Australia, New Zealand, Germany and the USA. Predominantly focused on still life while also painting portraits and interiors, Rae elevates ordinary objects through close examination and translation into paint.

“Jude Rae is one of our great contemporary painters and SL 359 is a welcome addition to the Gallery collection,” said head curator of Australian art Wayne Tunnicliffe.

“Rae has embraced the grand tradition and history of still-life painting and merged it with abstraction and formal concerns – her deceptively straightforward composition for SL 359 is an exploration of mass, matter and surface,” added Tunnicliffe.

In the award-winning SL 359 Jude Rae skillfully renders gas cylinders and fire extinguishers elevating them to a mesmerising state of potential threat – their pressurised gaseous states are weighty with the inherent possibility of their contents counteracting one another.

Rae also builds a second, quieter tension between the illusion of the painted objects and the materiality of the painting itself. In the vibrating, dissolving, blurring edges of her subjects a state of flux is created, between the artifice of form and the experience of surface.

The 2016 Bulgari Art Award recipient, Jude Rae, is overjoyed and honoured at the announcement of the award.

“I would like to express my sincerest thanks to Bulgari for its ongoing support of Australian artists. I am thrilled to have the opportunity to take up the Bulgari Italian residency and to have SL 359 become a part of the Art Gallery of New South Wales collection.”

“I know that the residency will have a great impact on my practice and will provide a vast array of incredible experiences,” Rae added.

The 2016 Bulgari Art Award acquisition Jude Rae’s SL 359 will be exhibited in the entrance court of the Art Gallery of New South Wales from 28 April.

Jude Rae (b1956) is known for her paintings of objects, people and architectural interiors. Over the last thirty years Rae has exhibited her work in Australia, New Zealand, Germany and the USA. She has twice been awarded the Portia Geach Memorial Prize for portraiture (2005 and 2008), and in 2007 she was commissioned to paint Professor Frank Fenner by the National Portrait Gallery of Australia.

Rae is most well-known however for her highly refined exploration of the genre of still life painting and her previously minimal depictions of everyday objects have become increasingly rich and complex in recent years. She has undertaken international artist residencies and taught at a variety of art schools including the Australian National University, the University of New South Wales, the University of Auckland and the National Art School in Sydney where she now lives. Rae’s work is the held in public collections in Australia and New Zealand and private collections around the world.

Bulgari was founded in Rome in 1884 as a single jewellery shop, whose magnificent jewellery creations soon became emblems of Italian excellence. Throughout the last few decades Bulgari developed into a global luxury brand renowned for its highly creative design in jewels, watches and accessories, and retailing in the major luxury retail precincts of the world. Up until 2011 Bulgari was majority-owned by the Bulgari family and, though it is now part of the LVMH Group, the Bulgari family are still instrumental in the management of the Bulgari brand and the design of jewellery. International success has carried the distinctive Bulgari design into a diversified portfolio of products and services and, increasingly, hotels.