A journey into the world of Aboriginal art

As part of the soon-to-be-aired art + soul television series, written and narrated by Hetti Perkins, and the book art + soul, the Art Gallery of New South Wales presents the art + soul exhibition during an ‘Open Weekend at the Gallery’, which will celebrate Aboriginal and Torres Strait Islander art and culture.

art + soul explores the diversity of Indigenous culture through three themes: ‘home and away’, ‘dreams and nightmares’ and ‘bitter and sweet’. Drawing on key works from the Gallery’s collection, it reveals the myriad of contemporary artistic expressions that evidence the enduring heritage of Indigenous Australia, in all its diversity and complexity.

This exhibition captures the remarkable energy of Aboriginal and Torres Strait Islander art, from the Papunya Tula Artists, the renowned art movement that had its humble beginnings in the early 1970s, to Rover Thomas and his phenomenal achievements in the East Kimberley right up to the present-day ‘black city culture’.

art + soul will showcase more than 100 works and objects. 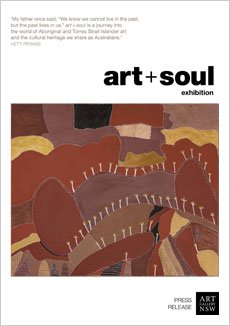