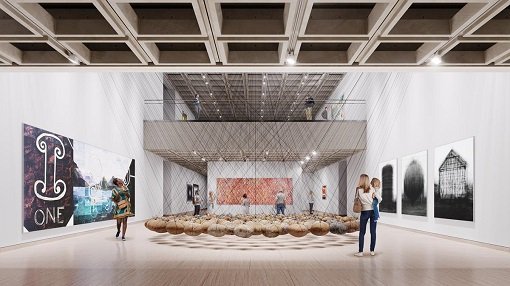 On the eve of its 150th anniversary, the Art Gallery of New South Wales is undertaking a program of works to its historic building with leading Australian architects Tonkin Zulaikha Greer (TZG). The upgrades will restore original architectural features of the building, provide more space for art and scholarship, and enhance the visitor experience and sustainable operations.

The revitalisation of the 19th- and 20th-century building is a key part of the Gallery’s Sydney Modern Project transformation, which together with its new SANAA-designed building is scheduled for completion in late 2022. The Gallery remains open throughout this period.

The Sydney Modern Project is funded through a $344 million public and philanthropic partnership – the largest of its kind to date in the arts in Australia – comprising $244 million from the NSW Government and $100 million from private donors.

Director of the Art Gallery of NSW Dr Michael Brand said the upgrades and reconfigured spaces designed by TZG are sympathetic to the existing Gallery’s architecture and will provide new ways for visitors to engage with the collection.

“It will be wonderful to see our much-loved building shine alongside the new SANAA-designed building when we open our expanded art museum in 2022. The Sydney Modern Project expansion and transformation will create an art museum campus with rich art, architecture and landscape experiences for everyone to enjoy.”

“We are delighted to be working with Tonkin Zulaikha Greer Architects who have a deep understanding of the Gallery’s history and significant place in Sydney,” Brand said.

Director of Tonkin Zulaikha Greer Architects, Peter Tonkin, said: “TZG is excited to be a part of the revitalisation of the Art Gallery of NSW. The Gallery is a vital and vibrant part of the state’s culture, evolving for more than a century under successive designers to meet an expanding and changing public role.

“To support the Sydney Modern Project and the future needs of the Gallery, we are weaving a sequence of new facilities into the existing building, respecting its tradition of significant architectural quality and improving its environmental and functional performance,” Tonkin said.

Most of the projects will commence in 2021 with the revitalisation program completed in 2022 in time for the opening of the new building. Further project details will be announced in due course.

The Gallery remains open throughout this period. The Capon Research Library and National Art Archive is relocating to a new purpose-built, expanded facility within the building that is fully accessible to the public. This major move means the collections will not be available for several months with the Library closing from 12 December 2020 to August 2021. Details of other resources and research tools will be available on the Gallery’s website. The Art Gallery Society of NSW Members Lounge will be closed from February to September 2021 while works take place. Temporary members’ facilities will be available during this time.

About the Vernon building

About the Sydney Modern Project
The Art Gallery of New South Wales is undergoing a $344 million expansion and transformation, known as the Sydney Modern Project. The construction of a new building and public art garden next to the existing Gallery is underway and will almost double current exhibition space. Designed by Pritzker Prize-winning architects SANAA, the new building’s dynamic indoor and outdoor spaces will transform the way visitors engage with art and ideas, providing greater opportunities to learn, create and discover. The Sydney Modern Project is funded by the NSW Government and private donors and is being delivered by Infrastructure NSW on behalf of the Gallery and the NSW Government. It is scheduled for completion in 2022 and the Gallery remains open during construction.