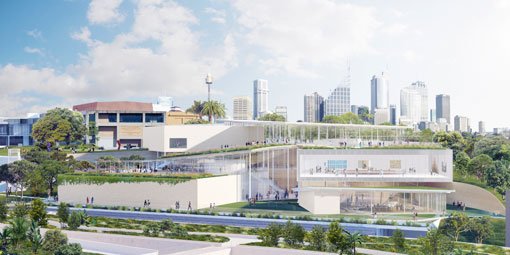 The Art Gallery of New South Wales has welcomed the announcement of Richard Crookes Constructions as the selected contractor for the Sydney Modern Project.

“We look forward to the next stage of the project that will bring physical form to SANAA’s magnificent design. We are creating an extraordinary building that will transform our institution and the way visitors engage with art,” Dr Brand said.

A public Art Garden will link the new and existing gallery buildings, creating a unique art museum experience for all visitors.

The Gallery has been in discussions with leading Australian and international artists and cultural organisations to plan site-specific commissions, future exhibitions and collaborations.

The $344 million Sydney Modern Project is the largest public-private partnership of its kind to be successfully achieved to date in the Australian arts. Together with the NSW Government’s $244 million in funding, the Gallery has attracted unprecedented philanthropic support, exceeding its fundraising target of $100 million to support the construction of the new standalone building.

President of the Art Gallery of New South Wales Board of Trustees, David Gonski AC said, “This is an exciting time for the state’s leading art museum as we move closer to realising our compelling vision for the future.

“We are truly grateful for the NSW Government’s foresight in making such a significant public investment in the arts, and the very generous donors who have pledged support for the new building,” Mr Gonski said.

Infrastructure NSW is managing the delivery of the expansion project on behalf of the government and Gallery. Construction of the Sydney Modern Project is expected to commence in the coming months and be completed in 2022.

About the Sydney Modern Project

A new standalone building, designed by SANAA, will almost double the space for the display and enjoyment of art. The Gallery will be able to show more of its outstanding art collection, which belongs to the people of NSW, and host more of the best exhibitions from Australia and around the world.

The design brings together art, architecture and landscape in spectacular new ways with dynamic galleries and seamless connections between indoor and outdoor spaces in one of the world’s most beautiful cultural precincts. A public Art Garden will link the new and existing gallery buildings.

Highlights of the expanded Gallery include a new prominent destination for Aboriginal and Torres Strait Islander art; a large gallery for major exhibitions; a unique contemporary art space repurposed from a decommissioned WWII oil tank; and flexible spaces to expand learning programs for schools, communities and families.

The Gallery is setting a new benchmark for cultural institutions as the first public art museum in Australia to achieve the highest environmental standard for design. The Green Building Council of Australia has awarded the Sydney Modern Project a 6-star Green Star design rating.

This achievement is testament to the Gallery’s commitment to sustainability and SANAA’s innovative design. Co-founders Kazuyo Sejima and Ryue Nishizawa were awarded the Pritzker prize – architecture’s highest honour – in 2010, and earlier this year they received the Thomas Jefferson Foundation Medal in Architecture. The Japanese architects have designed some of the world’s most prestigious art museums, including the Louvre’s satellite museum in Lens, France, and the 21st Century Museum of Contemporary Art in Kanazawa, Japan. This is their first Australian building.