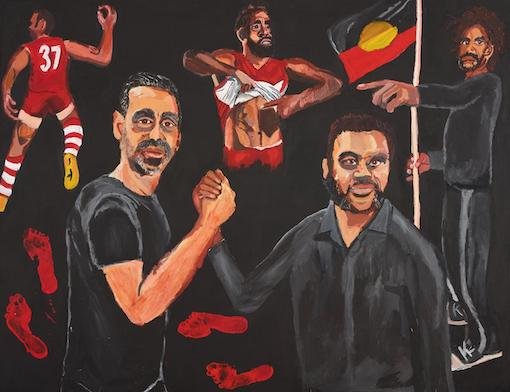 An Archibald Prize finalist for four consecutive years, Namatjira is the first Aboriginal artist to win the Archibald Prize in its 99-year history and his painting Stand strong for who you are is one of ten Archibald Prize 2020 finalist portraits featuring an Indigenous sitter – a new record for the prize.

In the portrait, Namatjira has painted himself alongside Goodes, whom he describes as “a proud Aboriginal man who stands strong for his people”.

On hearing the news Namatjira said: “I’m so proud to be the winner of the Archibald Prize, and to be the first Aboriginal artist to win is really special. I feel like this is a very important moment in Australian art. It’s an honour to be the first, but I also want to acknowledge all of the Indigenous finalists and Indigenous sitters for the Archibald this year and in past years.

“When I saw the documentary The final quarter about Adam’s final season of AFL, my guts were churning as I relived Adam’s experiences of relentless racism on and off the field. Memories of my own experiences were stirred up and I wanted to reach out and reconnect with Adam.

“We share some similar stories and experiences – of disconnection from culture, language and Country, and the constant pressures of being an Aboriginal man in this country. We’ve also both got young daughters and don’t want them to have to go through those same experiences.

“When I was younger and growing up in the foster system in Perth, Indigenous footballers were like heroes to me. Goodesy is much more than a great footballer though, he took a strong stand against racism and said, ‘enough is enough’. I stand strong with you too, brother,” said Namatjira.

The pair first met in 2018 when Goodes visited the school in Indulkana, where Namatjira lives, as part of his work promoting Indigenous literacy. Namatjira decided to reconnect with Goodes after watching the 2019 documentary The final quarter, which explored the final three years of his playing career when he publicly called out racism, sparking heated public debate.

Born in Mparntwe (Alice Springs) in 1983, Namatjira lives in the community of Indulkana in the APY Lands in the north-west of South Australia and works at Iwantja Arts. Since 2013, he has been painting portraits of important figures, both personally familiar and famously political. He is an acute observer of national and international politics and the connections between leadership, wealth, power and influence. He is the great-grandson of the renowned artist Albert Namatjira, who exhibited in the Wynne Prize in 1944 and was the subject of William Dargie’s 1956 Archibald-winning portrait.

Art Gallery of NSW director Michael Brand said Namatjira’s painting was selected as one of 55 finalists and then as the winner from a record number of 1068 entries for the Archibald Prize.

“I am delighted that Vincent Namatjira has become the first Indigenous artist to win the Archibald Prize, for his portrait of Adam Goodes. Painted in a uniquely personal style, it also features Vincent himself, pointing to Adam as a great Australian,” said Brand.

“Vincent’s work shows how much portrait painting still has to say and what strong voices our Indigenous artists have. I commend the Board of Trustees both for their choice of winner and for the respect they have shown to all the artists during the judging process,” he said.

The Archibald Prize winner is decided by the Gallery’s Board of Trustees. Board president David Gonski said, “We were impressed by the large number this year of excellent entries, but the winning entry drew us all towards it and was compelling. The decision was a unanimous one.”

The Archibald, Wynne and Sulman Prizes, the Young Archie competition and the Archibald Prize regional tour are all generously supported by presenting partner ANZ.

Mark Whelan, Group Executive, Institutional at ANZ was delighted to hear that Vincent Namatjira had been selected as the winner of the Archibald Prize 2020.

“To be awarded the Archibald Prize is an exceptional achievement and we congratulate Vincent Namatjira. The Archibald Prize is one of Australia’s most prestigious and iconic awards, which showcases the best of our creative talent and makes it accessible to all of us. We are proud to have supported this iconic exhibition for 11 years,” said Whelan.

Namatjira was highly commended in the Archibald Prize 2018 for his painting Studio self-portrait, which is now in the Art Gallery of NSW collection.

This year the Art Gallery of New South Wales Trustees awarded a highly commended honour to Tsering Hannaford for her Self-portrait after Allegory of Painting. Six-time Archibald Prize finalist for a series of self-portraits, Hannaford was inspired by Artemisia Gentileschi’s c1638–39 portrait, where the artist used two mirrors to observe herself in the act of painting. 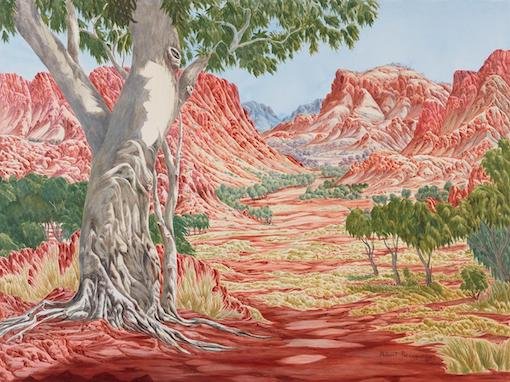 The Wynne Prize is awarded annually for 'the best landscape painting of Australian scenery in oils or watercolours or for the best example of figure sculpture by Australian artists’. First-time Wynne Prize finalist Hubert Pareroultja is a Western Aranda man from the Northern Territory. His painting Tjoritja (West MacDonnell Ranges, NT) represents the story of the giant caterpillars called the Yeperenye that became Tjoritja (West MacDonnell Ranges in the distant past).

Pareroultja’s win makes it the fifth year in a row that an Indigenous artist has been awarded the Wynne Prize, following the Ken Family Collaborative in 2016, Betty Kuntiwa Pumani in 2017, Yukultji Napangati in 2018 and Sylvia Ken in 2019.

“When I heard the story of my winning I was in shock. It was like I was somewhere else, in outer space. The work is really detailed. I put in a lot of details and it was hard work. I like it this way,” Pareroultja said.

Art Gallery of NSW director Michael Brand said: “We are all very excited to see Hubert Pareroultja win the Wynne Prize 2020 for his exceptional depiction of his country, Tjoritja (West McDonnell Ranges).”

“The way he has taken the Hermannsburg watercolour tradition onto a large canvas is breathtaking, as is the way he infuses a familiar looking landscape with such deep spiritual meaning. Hubert’s win marks an important moment for landscape painting in Australia,” Brand said.

Nyunmiti Burton has been recognised as a highly commended finalist in the Wynne Prize 2020 and winner of the 2020 Roberts Family Prize for her work Seven Sisters.

Finalists in the Wynne Prize are also eligible for the Trustees’ Watercolour Prize valued at $5000. Sydney-based artist Julianne Ross Allcorn’s watercolour triptych, Mollitium 2, celebrates the resilience of the Australian bush – from the threat of fire, to escape and regrowth. 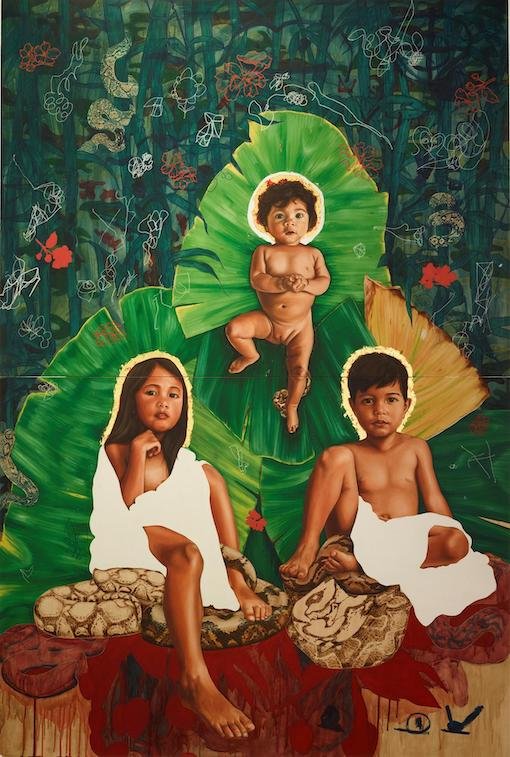 Marikit Santiago wins Sulman Prize 2020 for her work The divine

The Sulman Prize, valued at $40,000, is awarded for the best subject painting, genre painting or mural project by an Australian artist. Each year the trustees of the Art Gallery of NSW invite a guest artist to judge; in 2020 artist Khadim Ali selected 18 finalists for the Sulman Prize.

On hearing that her work The divine had been awarded the Sulman Prize 2020 winner, western Sydney artist Marikit Santiago said she is absolutely thrilled.

“I’m honoured to be awarded the Sir John Sulman Prize, especially with such a deeply personal work made about and with my three children. I share this win with them and because of them,” said Santiago.

The divine explores the ideals and principles surrounding faith, creation stories, motherhood, cultural heritage and gender roles. Her practice negotiates the tensions that exist within her multiple identities as a Filipina, an Australian, a mother and an artist.

The painting portrays Santiago’s three children, who often collaborate with her in her creative processes; the pen and paint markings in this piece were made by Maella, aged 5; Santiago, aged 3; and Sarita, aged 1.

On the winning work, Ali said The divine is rich in content with many layers.

“Marikit is known for touching upon controversial social, religious and political issues relating to her cultural and social background. Her works reflect the multiple layers of her ethnic and social identity and demonstrates both impressions of acceptance and rejection.

“She has been able to visualise and express the theological and historical myths about the creation and expulsion of human with the power of contemporary mediums. She has chosen her three children not only as the subject matter but also as collaborators of this painting. The elements of the work are fused together in a powerful visual language,” said Ali.

All finalists in the Archibald, Wynne and Sulman Prizes 2020 will be exhibited at the Art Gallery of NSW from 26 September 2020 to 10 January 2021.

For safety, tickets are dated and timed with limited exhibition capacity. Due to popular demand, opening weekend tickets are already sold out. Over the course of the exhibition visitors are strongly recommended to pre-book their ticket in advance, to avoid disappointment. Audiences also have the opportunity to purchase a Gallery pass to the Archibald, Wynne and Sulman Prizes 2020 and Streeton ($35 adult / $32 concession / $30 member).

Finalist works in the Archibald Prize 2020 will also tour to regional New South Wales and Queensland from 22 January 2021.

The Gallery will continue to be guided by the NSW Government’s health guidelines. For full details and tickets and to keep up to date with all things Archibald, please visit our Archibald, Wynne and Sulman Prizes 2020 exhibition page. 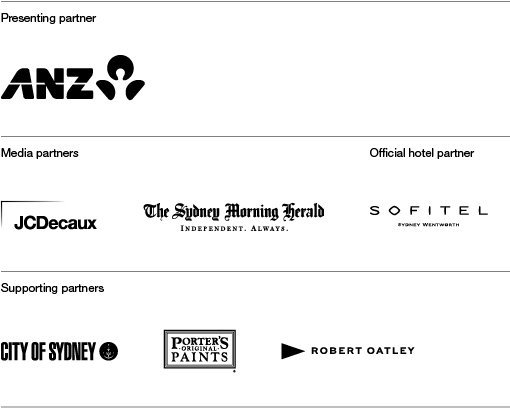 
Due to COVID-19 capacity restrictions, tickets are dated and timed. You need to specify a date and time when booking. Tickets can be used once.

SOME SESSIONS AND DAYS SOLD OUT! Please check Qtix ticketing site before visiting. 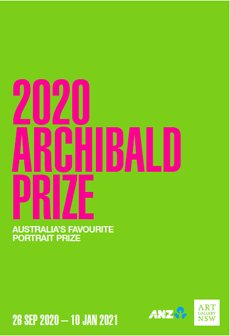