Vincent Fantauzzo for his portrait of Matt Moran 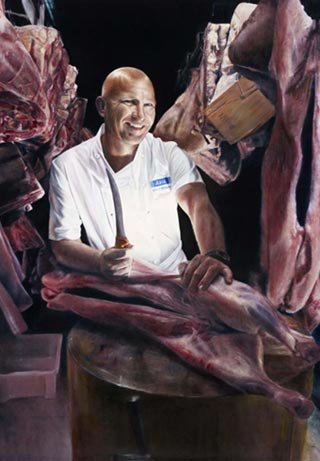 Melbourne artist Vincent Fantauzzo has been awarded the Packing Room Prize in conjunction with the 2011 Archibald Prize for his portrait of celebrity chef, Matt Moran.

Matt Moran is now a household name from his appearances on television cooking shows including MasterChef, The Chopping Block and My Restaurant Rules. Moran and his business partner Peter Sullivan own two of Australia’s premier restaurants: ARIA in Sydney and in Brisbane. He is also the author of two cookbooks.

“Matt is one of my best friends. I’ve known him for years,” says Fantauzzo.

Fantauzzo experimented with numerous different poses before settling on this one. “Some of them looked a bit sinister with the knife and meat.”

Fantauzzo chose to surround Moran with meat. “He grew up on a dairy farm, he has a lamb business and he’s very into fresh produce and meat. It’s a bit intense, I suppose, if you’re a vegetarian.”

Born in England in 1977, Fantauzzo came to Australia as a child. He has a Bachelor of Fine Art (Painting) and a Master of Fine Art from RMIT University, Melbourne. He was GQ’s Artist of the Year in 2009 and Cultural Ambassador for the 2011 Melbourne Fashion Festival. He has had solo exhibitions in New York, Hong Kong, India and Vietnam and currently has an exhibition called Light and Dark at the Western Australian Museum.

Vincent Fantauzzo won the People’s Choice Award in both 2008 and 2009 for portraits of actor Heath Ledger and child actor Brandon Walters, who played the young Aboriginal boy Nullah in Baz Luhrmann’s film Australia. His portrait of Ledger was also Highly Commended by the judges.

Finalists for the Archibald, Wynne and Sulman Prizes were also announced today.

This year there were 798 Archibald entries, 810 Wynne entries and 633 Sulman entries.