The Art Gallery of New South Wales is highly honoured to participate in the Australian tour of these remarkable treasures from Afghanistan as part of our commitment to the arts of broader Asia. We look forward to presenting the exhibition in the context of an art museum at the same time as a special display of works by the Afghani-Australian artist Khadim Ali, Michael Brand, director, Art Gallery of New South Wales.

A remarkable exhibition of more than 230 stunning and precious artefacts from archaeological sites along the ancient Silk Road, Afghanistan: hidden treasures from the National Museum, Kabul will open at the Art Gallery of New South Wales on 7 March 2014. Already, more than 1.7 million people around the world have seen this exhibition which has been held in more than 20 major institutions including museums in the USA and Europe.

Visiting Australia for the first time, this exhibition – with its priceless treasures, some thousands of years old – offers a rare opportunity to discover the surprising, untold story of the long and extraordinarily rich culture that is Afghanistan.

Afghanistan was at the heart of the Silk Road, the trading route travelled by Alexander the Great, Genghis Khan and Marco Polo, linking ancient Iran, Central Asia, India and China, and the more distant cultures of Greece and Rome.

The National Museum, Kabul housed many precious artefacts from Afghanistan’s cultural history. After more than ten years of war in 1989, thousands of artefacts from the collection were hidden in a bank vault in Kabul by a small group of courageous staff from the National Museum to protect them from bombing and looting. Known as the ‘key-holders’, these men and their brave acts ensured that these priceless treasures remained safe for 14 years before they were once again revealed to the world in 2003, as some of the only remaining artefacts from ancient Afghanistan.

It is a rare privilege to have these treasures here at the Gallery. This is also a story of the heroism of many individual Afghanis in saving their cultural heritage. This exhibition is a wonderful opportunity for Australians and our international visitors to see the rich cultural diversity of Afghanistan, a very different perspective from that of most news stories over the many years of conflict, said Michael Brand, director of the Art Gallery of New South Wales.

Ranging in date from 2200 BC to the second century AD, the objects are drawn from four major archaeological sites in Afghanistan – the ancient city of Fullol, where gold bowls from the Bronze Age were unearthed; the former Greek city Aï Khanum, founded in the wake of conquests by Alexander the Great; treasures from what is thought to be a merchant’s storeroom in Begram; and lavish gold jewellery and ornaments found in the graves of six nomads in Tillya Tepe.

View Journey of the Treasures 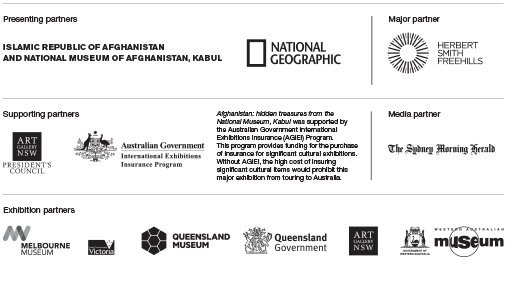