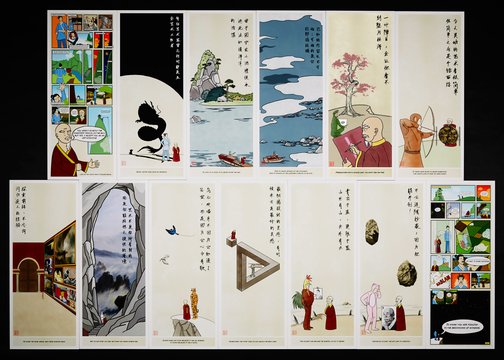 By subverting traditional tropes of Chinese culture, particularly the notions of the ‘young foolish grasshopper’ and ‘wise old master’, my work depicts the odyssey of an art disciple who believes that Renaissance values are the epitome of art. Animals from the Chinese zodiac symbolise the phases of the disciple’s journey as he explores his previous beliefs, the concept of knowledge, and whether one can ever attain a full understanding of art.

The narrative often lies in the objects portrayed in an artwork. How do the objects in Li-Hsien Lee’s body of work and Brett Whiteley’s Self portrait in the studio convey meaning? What are the postmodern elements of each work?

What objects would you include in a self-portrait to indicate to the viewer who you really are?