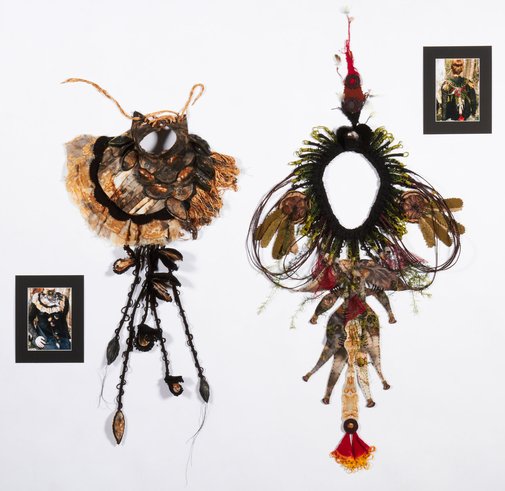 Pyriscence: (seed release by fire) is the ending is the beginning
Serotiny: (regeneration) of the human condition in the wake of psychic death

An exploration of bushfires and serotiny in the Banksia species, combined with a case study of colonial Australia focusing on Tom Roberts’ A summer morning tiff, exposed themes of conflict and psychic death, illuminating the regeneration of the human condition. This evolved to encompass an exploration of the Indigenous presence in the landscape; further, to a juxtaposition of the roles of Indigenous and colonial women. This connection to landscape was manifested through the use of natural eucalyptus dyes and the process of burning – this marriage of concept and practice alluding to Indigenous collective memory, focusing on mourning and rebirth.

Create a wearable object exploring the role of women in society. Carefully consider the relationship between material and conceptual practice, similar to the way Roebuck has approached her body of work.

Roebuck has incorporated a detail of Frederick McCubbin’s On the wallaby track 1896 into her work. Like Roberts, McCubbin was a key figure in the Heidelberg school. Research this group of artists and their approach to Australian landscape and identity.