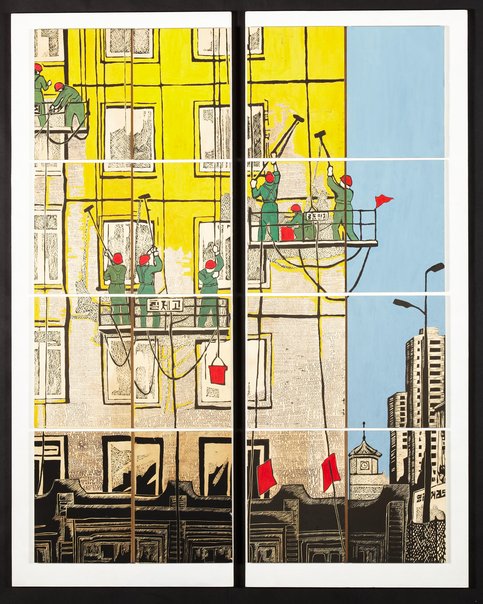 This is a recontextualisation of Choe Yong Sun’s artwork The construction site 2005 exhibited in Brisbane at the 6th Asia Pacific Triennial of Contemporary Art. It deals with issues of government and media censorship in the Eastern and Western spheres of influence. In the original work the walls of the building were being repainted, but in appropriating this work I have changed the conceptual significance of that symbolism by layering the walls with collaged texts from world revolutions, specifically the Tiananmen Square Massacre of 1989. It is important to consider the suppression of free speech and the power of government censorship in differentiating between what is real and what is fake.

Walkthrough
See this artwork in the walkthrough

Jessie Traill depicts the building of the Sydney Harbour Bridge in 1929. What makes this work effective? Research and compare other artists who have used the same subject matter.

Consider Allen Huang’s image of workers painting a city building. To what extent do the figures play a role in the effect of the work? In what way is Huang’s choice of subject matter reminiscent of artists of the 1920s and 30s who celebrated urban expansion? Does the contemporary audience bring another layer of meaning to the work?