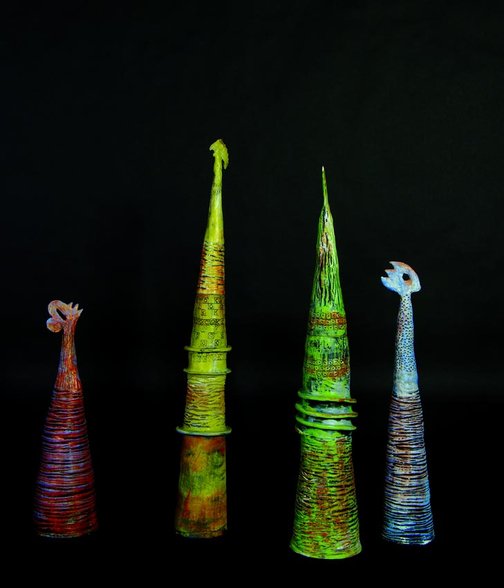 I have always had an interest in structures and architecture and decided to express that interest in my work. Vertical formations represent the basis of architecture; structures appear in the landscape in varied designs, shapes, textures and heights, and that’s what I tried to capture.
In terms of the media and tools: I used clay because it is a natural resource and I wanted to link it to the idea of shelter, and small tools were used to create patterns (scaled down as if it were the size of normal buildings).

Consider if Thomas Olds’ influences are contemporary or historical, from Western culture or another. Is there evidence in his work? Investigate how ceramics are most often viewed and utilised in our contemporary society. Imagine Olds’ sculptures were discovered in an archaeological dig. What would their purpose have been?

Research votive stupas and what they symbolise in Buddhist culture. If Olds’ work was scaled up to the size of architecture, how would the viewer’s relationship to it shift?

Research the materials and technologies used to produce each work. Has there been much change over time? Locate definitions of ‘primitive’ and ‘traditional’. Investigate why these can be contested and problematic terms when discussing art. Research the influence ancient cultures from Asia and Africa have had on modern and contemporary art practice. Suggest why Olds has incorporated ‘primitive’ into his title.