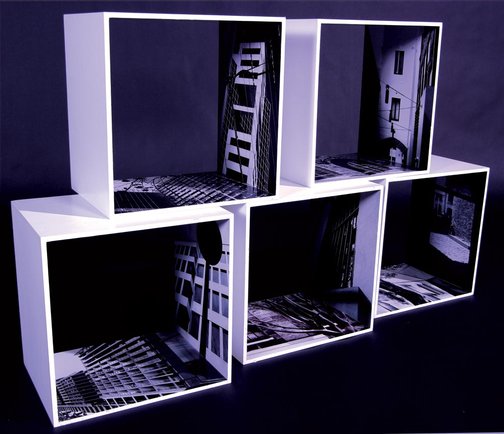 I explored the changing architectural patterns, forms and reflections within the local built environment. I have always been interested in building design, the sense of permanency often radiated by significant buildings, which is further enhanced by the age and history of older structures. The boxes represent the buildings. Often people fail to appreciate the building’s facade and only concentrate on the interior. By placing the facades inside the box, attention is drawn to their true beauty. I used black and white photography to further give a sense of history to the buildings and allow light and shadow to be significant.

List the media used in Jessica Ward’s artwork and imagine the process of developing and resolving the work. Outline how Ward has made her work’s concept material. Consider your orientation to Outside in and observe others viewing it in the exhibition space. Suggest how this artwork compels the audience to interact with it.

What do you think Untitled (elongated plinths) by Rachel Whiteread is a sculpture of? Investigate Whiteread’s art-making practice and body of work, including her interest in architectural spaces. Ward’s work compels the viewer to consider something the artist believes is overlooked or rarely contemplated. Examine the similarities with Whiteread’s intentions.

Define the concept of positive and negative space. Compare Whiteread’s and Ward’s use of negative and positive space, and analyse how this creates the sculptural form of each work. Draw what could have surrounded the negative space that Whiteread has cast. Envisage the interiors of Ward’s architectural facades.

Consider encountering these two works in a context other than a gallery. Suggest a variety of art and non-art locations. Explore how they would affect your interaction with and interpretation of the work. Discuss the influence the display site has on an audience and an artwork.

Whiteread and Ward both evoke and challenge the ‘white cube’ space of modern galleries. Research curatorial practice in the 20th and 21st centuries. Locate examples to indicate how it has changed to accommodate challenges posed by modern and contemporary artists.