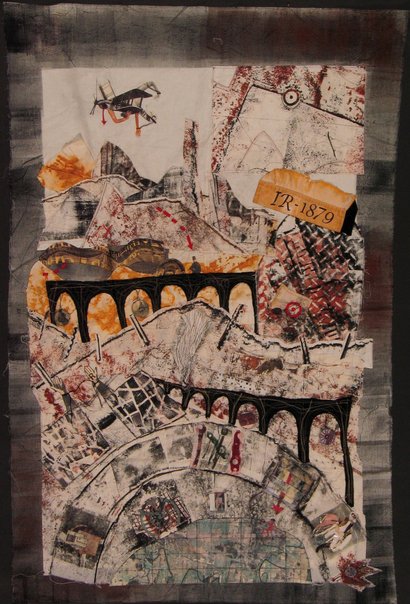 I combined my love of contemporary textiles with non-traditional printmaking techniques to produce surface qualities relating to the industrial landscape. Extensive references to natural landforms that have been altered by transport and mining since 1879 were incorporated. The Dada practice of photomontage directly influenced the way I constructed imagery about the Industrial Revolution and its impact upon the landscape, transport and workers, including today’s IR laws. Schwitters, Bayer, Delaunay, the Realists and early photographers became sources of inspiration for subject matter, symbolism and techniques. Changing perceptions towards mechanisation at the turn of the 20th century are symbolised by the destructive airplane, referencing Ernst’s ‘Murdering airplane’.