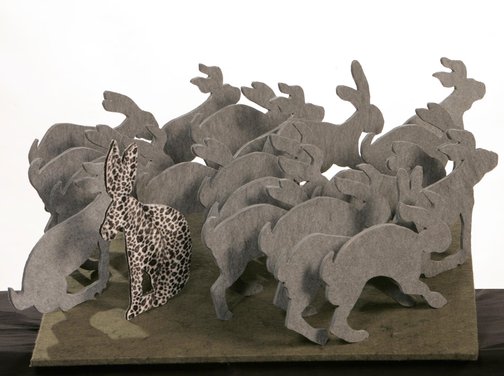 There were three main ideas for my body of work. In China the zodiac signs are very important and traditional and my sign is the Year of the Rabbit; also in Biology class I became aware of the devastation that the introduction of rabbits has caused to the Australian environment. The main influence, however, was the work of Joseph Beuys.

Four main shapes were chosen, then cut out of wood and covered with grey felt (reference to Beuys). These rabbits became the symbol of the 'the group’ or 'the male’, and the single rabbit 'the female’ or 'the individual’.

Discuss the similarities and differences between Jie Pan’s Boys will be Beuys and Ute Klophaus’s documentation of the Joseph Beuys performance Explaining pictures to a dead hare. Explore the significance of Bueys’s materials and process. Outline how Pan has incorporated these elements into her work. Analyse how each artwork is an attempt by the artist to represent their understandings of the worlds in which they live in.