Theatre of dreams, theatre of play

More about the exhibition

Theatre of dreams, theatre of play provides rare insight into one of the world’s oldest forms of theatre – nō and kyōgen.

Click on one of the small images to view slideshow 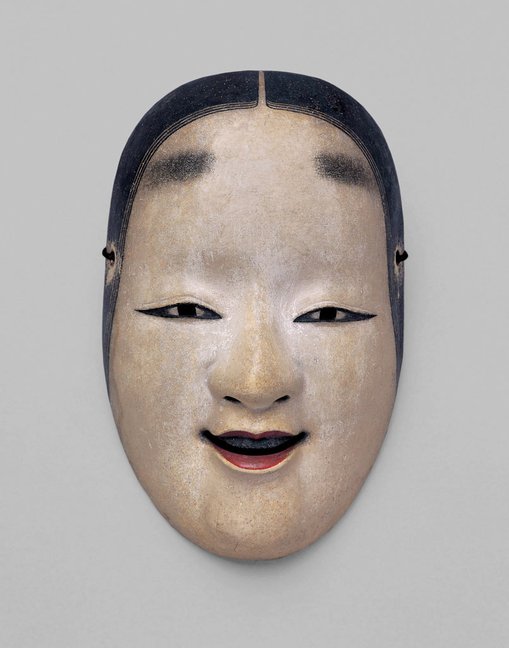 This mask portrays the features of a sweet young woman. One trait of the ko-omote mask is the three strands of hair that fall naturally from the top of the forehead. This is mask is used for various young female roles in different plays depending on the wishes of the actor.

Kasshiki refers to a young attendant who announces mealtimes in a Zen monastery. Kasshiki masks are divided into three types: large, medium and small. One of the defining differences between types of kasshiki masks is in the depiction of the forelocks. In this mask, the fringe fans out to either side in the shape of a ginkgo leaf.

In kyōgen, female roles are usually performed without masks, but the oto mask is used to indicate an unattractive, ever-nagging woman. This mask is also employed to portray Buddha and mushroom spirits.

A particularity of kyōgen is that one mask can be used for different characters. The flattened ears, downturned eyes and lips drawn together as if whistling are typical features of the usofuki (literally ‘whistler’) mask. It is used for mosquito spirits, octopus ghosts, mushrooms or scarecrows.

Hannya masks include white, blackish and red types, which are used differently depending on the performance. The horns, bulging eyes and gaping mouth convey a sense of obsessive jealousy and rage. Hannya masks are employed for the ghosts of vengeful, jealous women.

This mask is used in the performance of Okina (Shiki sanban) when the lead performer dances as a prayer for peace and stability. The origins of the okina (old man/god) mask lie in the objects of worship kept within Shinto shrines. It is the oldest type of nō mask with the earliest examples dating from the beginning of the 14th century.

Karaori (literally ‘Chinese weave’) is the costume that is most evocative of nō. It is a lavishly woven robe with small sleeves (kosode) that is usually worn by a female character as an outer or undergarment. Colours can suggest different meanings: for younger female characters red (iro-iri) is used, while robes for older women are ‘without red’ (iro-nashi). The patterns can consist of flowers of the four seasons, or imagery drawn from courtly literature such as the Tale of Genji.

The small-sleeved nuihaku (literally ‘embroidery and foil’) is considered one of the most beautiful robes after the karaori. It is a luxurious inner garment with embroidery interspersed with gold or silver foil pattern on a satin or silk base. It is used in both nō and kyōgen for female, male, child and courtier warrior roles and is often worn tucked up at the waist (tsuboori).

The atsuita (literally ‘thick board’) is used mainly as an outer or undergarment for male roles. Made of fabric woven in an intricate brocade technique, it utilises patterns that consist of geometrical, more masculine shapes, including checks, hexagons and Chinese-style patterns with dragons in clouds or Chinese lion roundels.

Nō performances are usually accompanied by an orchestra of four instruments. As well as an hourglass-shaped shoulder drum kotsuzumi (like this one), there is a larger hip drum (ōtsuzumi or ōkawa), a cylindrical taiko (stick drum) and a transverse flute (fue or nōkan).

Works such as these, which depict the stage with the entire ensemble of actors and musicians performing before the audience, provide valuable information on the social context of nō theatre. This particular hanging scroll was commissioned to commemorate a special banquet hosted at the Imperial palace and pictures the performance of the nō play ‘Rolls of silk’, held for an illustrious group of guests including courtiers and Buddhist monks.

Handscrolls and albums portraying key scenes from nō and kyōgen plays often use a standardised composition that shows the main characters set against a blank background. This image is from a luxuriously bound album illustrating 50 popular plays and is striking for its use of delicate brushwork, vibrant pigments and meticulous attention to detail.

Nō (meaning 'skill’ or 'talent’, also spelled noh) has its roots in courtly entertainments. Presented by travelling troupes of performers, ritual dances were offered at agricultural festivals and at Buddhist temples and Shinto shrines on auspicious occasions.

In the 14th century, Kan’ami Kiyotsugu (1333–84) and his son, the celebrated actor, playwright and theoretician Zeami Motokiyo (c1363-c1443), consolidated these performance styles into a sophisticated dramatic art that attracted official patrons and became an integral part of the social elite’s culture.

Especially during the Edo period (1615-1868), the privilege of staging and enjoying nō performances was almost exclusively reserved for the military aristocracy. The rare exception was ‘subscription nō’ that was hosted by temples and shrines for fundraising purposes. It wasn’t until the early 20th century that theatres were constructed for public nō performances.

Traditionally, all nō and kyōgen performers are male, so costumes and masks help identify the characters.

Robes, trousers, sashes and headbands are combined according to set rules, with tailoring, pattern, colour and draping used to define gender, social status and psychological state.

Since its inception in the 14th century, nō has been closely associated with the military aristocracy. Its costumes have therefore been influenced by the refined garments of the elite samurai classes. On the other hand, kyōgen costume was modelled after the everyday garments of ordinary people, comprising plain silks and patterned hemp.

There are over 200 types of nō masks known today, which include male and female characters, deities and demons. Referred to as omote, or ‘face’, nō masks go far beyond the limits of make-up and are thought to be imbued with spiritual power.

Nō masks are generally marked by a neutral expression, which sets them apart to those used in kyōgen. Most kyōgen masks depict non-human characters such as deities, ghosts and the spirits of animals and plants.

Attesting to Japan’s tradition of fine craftsmanship, nō and kyōgen masks are worked out of a single block of Japanese cypress wood. However, they are far from static.

Because the masks are modelled asymmetrically, with the sightline of each pupil being slightly different, a skilled actor can create a variety of emotions with minute movements of his head.

A slight upward tilt of the head brightens (terasu) the mask to assume a cheerful expression; turning the head down literally ‘clouds over’ (kumorasu) the mask, suggesting sadness or a brooding mood.

For an introduction to nō performance,
watch Noh to now playlist on YouTube