The artist and his work

Thanks to Kaldor Public Art Projects, the Art Gallery of NSW is the site of Tatzu Nishi’s installation War and peace and in between from 2 October 2009 to 14 February 2010. This important new project accompanies an exhibition at the Gallery that marks the 40th anniversary of the Kaldor projects.

Continuing in the tradition of the first Kaldor project – Christo and Jeanne-Claude’s wrapping of Sydney’s Little Bay in 1969 – Nishi has created a major intervention outside the Gallery that changes the way we see the everyday. Just as the rocky coastline of Little Bay acquired a new monumentality and a remarkable visual memory that resonated around the world, Nishi’s project has taken two well-known public sculptures and rescued them from the invisibility that over-familiarity can bring.

Nishi’s projects continue to involve the artist changing his name – from Tazro Niscino, to Tatsurou Bashi, to Tatzu Oozu, and now Tatzu Nishi. His strategy of shifting and occluding his own identity parallels the way he displaces or re-contextualises the familiar in his installations. The first of these pieces that I experienced was at the second Liverpool Biennial in 2002. Situated between the 19th-century commercial centre of Liverpool and the majestic maritime buildings on the Mersey stands an imposing monument to empire. In this architectural enclosure, sculptures representing aspects of imperial history surround an elevated plinth, which is sheltered under a ceremonial dome raised up on four sets of four columns. At the centre of all this is a vastly over-scaled bronze of Queen Victoria. Nishi completely reconfigured this patriotic symbol. He built a structure to surround the whole edifice, enabling the public to approach the centre of the piece – which now appeared to be an interior room – by a stairway. At the top of the stairs, you entered a lobby and then moved into a hotel suite constructed between the ceremonial columns. The floor was carpeted, the walls papered and everything furnished as for five-star accommodation, complete with bathroom and toilet, bedroom and living area. The elephant in the room was Queen Victoria, whose grossly inflated body stood regally on the red carpet. The Biennial invited people to check in and spend the night with Queen Vic, and it was booked out. Here, the phenomenon of the monument was reversed so that what was outdoor became indoor and what was public became private.

This, it turns out, is absolutely typical of Nishi’s projects, which are all about making the everyday strange, working with scale and displacement, and often with cultural forms such as the civic monument. Nishi moved to Germany from his native Japan in 1987. One of the things that struck him was the proliferation of monumental sculptures in Europe. He also noted that, with a few exceptions that are the focus of annual ceremonies, most of them commemorated some event that sadly no one seems to remember. Indeed, he noted that most people just did not see these large sculptures anymore. I do not know if, at one level, Nishi (or Bashi, as he was for the Liverpool Biennial project) is making a playful critique of the symbolic content of the pieces or if he is simply refreshing the lost. When I first saw Queen Victoria in Liverpool a couple of years before Bashi’s project, I was actually quite shocked by the iconography of subject peoples that surrounds the monarch. Whether Bashi intended to or not, he has isolated the queen from all this symbolism and re-presented her as a vulnerable piece of absurdly over-size decor in a hotel room.

In Sydney, Nishi has created two similar works that he calls War and peace and in between. The two structures each enclose an equestrian sculpture by the English sculptor Gilbert Bayes. Bayes named these allegorical figures, which flank the Palladian portico of the Gallery, The offerings of peace and The offerings of war. Although only placed outside the building in 1926, these sculptures make no concessions to the 20th century. In fact, they are completely at one with the neo-classical Victorian façade, which is in itself allegorical. The sandstone steps and classical columns with their Greek pediment already speak of ambitions from another era, but to make this symbolism more explicit the building is adorned with the names of great Renaissance artists and architects, none of whom ended up in our collection. This heroic statement, the source of great amusement to the modern visitor, is defended by these larger-than-life horsemen. It may not be Nishi’s intention to send up this imperial outpost, but many of us will see it that way and enjoy the joke. ‘War and peace and in between’ does after all describe the façade pinioned between the two horsemen.

There is a serious aspect to both the possible comment and to the surreal strategy of making strange in that it helps us to see again and to read possible associations into objects that we have come to take for granted. The public enter the elevated rooms via stairs ramps constructed between the top step of the Gallery and Nishi’s temporary structures, finding themselves in a beautifully decorated living room in the case of ‘Peace’ and a bedroom for ‘War’. Everything seems completely normal except that, in the living room, the top of a rider appears on a coffee table like a giant bust while a horse’s head is wedged into a cabinet; in the bedroom, the horse and rider seemingly wade through a snowdrift of sheets atop the bed. We are accustomed to seeing these monuments from a distance and from plinths that raise them above our heads. Now we encounter them face to face at very close quarters, indeed in one case we look down on the figures. Both the domestic architecture and the sculpture have been made impossibly out of place and out of scale.

Much of the best art since the Renaissance, particularly in the case of conceptual art, seeks to make us experience looking and seeing in new ways; I think this is an exemplary extension of this tradition. Regardless of Nishi’s explicit intentions in his re-contextualisation of the Gallery façade and the Bayes sculptures, the inherent absurdity of the historical allegory is brought into focus. It also helps us to recognise how our values change over the years. It would be hard for anyone today not to be a little embarrassed by the imperial lack of sensitivity that includes chained colonials in the Liverpool monument to Queen Victoria. Regardless of whether you experience these works of Nishi’s in the light of critical historical displacement or just enjoy the unexpected encounter, having met the horsemen face to face you will probably never again walk past them unseeing. Oh, yes. And why ‘War’ in the bedroom? 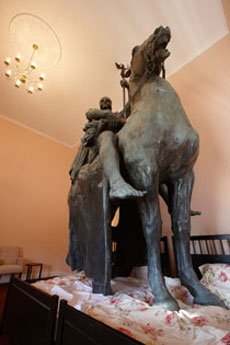 Tatzu Nishi War and peace and in between 2009