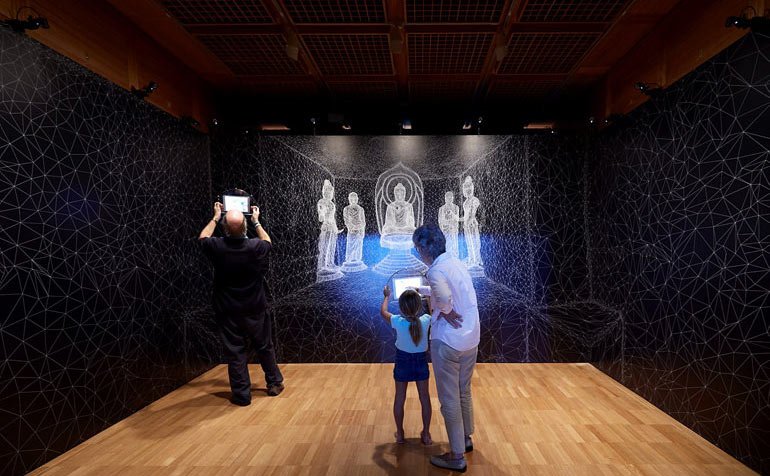 Pure Land: inside the Mogao Grottoes at Dunhuang installed in the Tang exhibition

Pure Land: inside the Mogao Grottoes at Dunhuang

The augmented-reality installation Pure Land: inside the Mogao Grottoes at Dunhuang is a virtual reconstruction of an important Tang dynasty cave. Built using virtual and augmented reality technologies from a laser scan of the cave architecture and high-resolution photographs, it places visitors in the shoes of an archaeologist exploring part of one of the world’s great treasuries of Buddhist art.

The city of Dunhuang is located in far northwestern China. During the Tang dynasty, between the 7th and 10th centuries, Dunhuang was a small, desert oasis town that lay on the crossroads of two major trade routes along the Silk Road. In its markets, travellers and traders heading west met those journeying east from the Indian subcontinent. The trade routes made Dunhuang a microcosm of ancient globalisation and cosmopolitanism, and also brought cultural emissaries including Buddhist monks.

The Mogao Grottoes at Dunhuang, also known as the ‘Caves of the Thousand Buddhas’, are a complex of almost 750 caves, 492 of which contain over 45,000 square metres of mural paintings and 2000 painted sculptures. These grottoes were hewn into the rock face by Buddhist monks as shrines, repositories and places of reflection. The largest is almost 40 metres high and home to a 30-metre Tang statue of Buddha.

Unfortunately, the Mogao Grottoes are now threatened by rising levels of humidity and carbon dioxide due to their popularity as a tourist destination. Since 1999 the Dunhuang Academy, custodian of the site, has embarked on a program to digitise the grottoes through high-resolution photography and laser scanning. It is a program that many believe is essential to keeping the caves’ cultural history alive.

Pure Land is a reconstruction of Cave 220, a Tang-era cave important for the quality of its mural paintings. The cave served as a private temple for an eminent local family, the Zhai, who built it in 642 and maintained it until about 925. Figures depicting the Zhai patrons can still be seen at the foot of the entrance walls.

Cave 220 is roughly square, with a large niche on the western wall that contains stucco statues of Buddha and four bodhisattvas (mortal beings committed to attaining Buddhahood for the sake of humanity). The other walls depict Buddhist sutras, or scriptures. Cave 220 is unique among the Mogao Grottoes for its north and south murals, which are each dedicated in their entirety to an individual sutra. 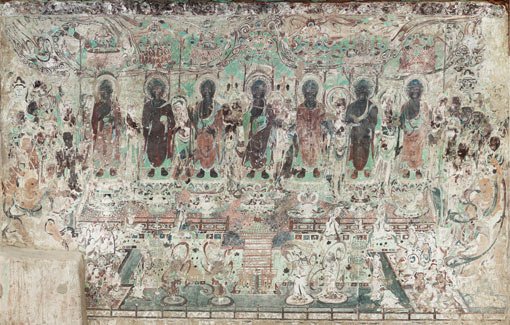 The north wall depicts the paradise of the Medicine Buddha sutra, telling the story of the 12 vows to alleviate suffering from the world that Buddha took upon attaining enlightenment. It is the only Magao Grotto painting to include seven Buddhas rather than just one. The Buddhas are surrounded by eight bodhisattvas, four dancers, 32 musicians and the 12 signs of the Chinese zodiac. They appear blackened today, but were originally brightly coloured. Pigment samples taken by Dunhuang Academy researchers were analysed to create the digital recolouration that appears and disappears in Pure Land.

The south wall depicts the Pure Land sutra of the Amitabha Buddha, the Buddha of infinite light and life. Amithabha’s Pure Land is said to be a paradise of unparalleled beauty, referencing the promise of rebirth. In the mural, Amitabha is joined by two bodhisattvas and surrounded by children in the lotus pond below. These children depict reborn souls who have avoided the suffering of birth.

The iteration of Pure Land exhibited in Tang 唐: treasures from the Silk Road capital uses augmented reality technologies to create an immersive, interactive environment. Visitors enter a specially constructed room which is almost the same size as Cave 220 and displays a white wireframe of the laser scan of the cave on a black background. They use one of two iPads to scan the walls, ceiling and floor of the room. Above them, 24 infra-red cameras detect their position and a bank of computers renders their view in real time, transmitting the image to the iPad screen via WiFi. The interactivity was created using a video game engine known as Unity. 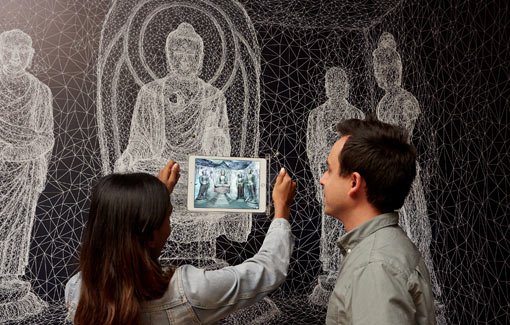 Inside Pure Land at the Art Gallery of NSW

Pure Land: inside the Mogao Grottoes at Dunhuang was created by professors Sarah Kenderdine and Jeffrey Shaw at the City University of Hong Kong in 2012, in partnership with the custodians of the Mogao Grottoes, the Dunhuang Academy. It was installed in the Tang exhibition by the Laboratory for Innovation in Galleries, Libraries, Archives and Museums, University of New South Wales.