The Birds by internationally celebrated US sound and media artist Stephen Vitiello will be installed at the entrance to the Art Gallery of NSW. This sound piece is based on Daphne du Maurier’s story of the same name. Inspired by the cacophony of Australian native bird life, Vitiello will ‘catch a listener by surprise as if there is suddenly a spoken voice or singing bird whispering in one’s unsuspecting ear’.

In addition to The Birds at the Gallery, Vitiello’s major work will be installed in the historic former Brickworks at Sydney Park from 13 August to 12 September. Entitled The Sound of Red Earth, it is the result of extensive sound recordings captured by the artist throughout the Kimberley region in Western Australia. 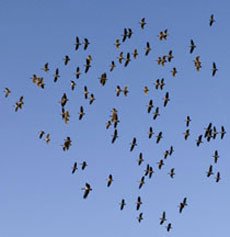 Location:
Front of the Gallery